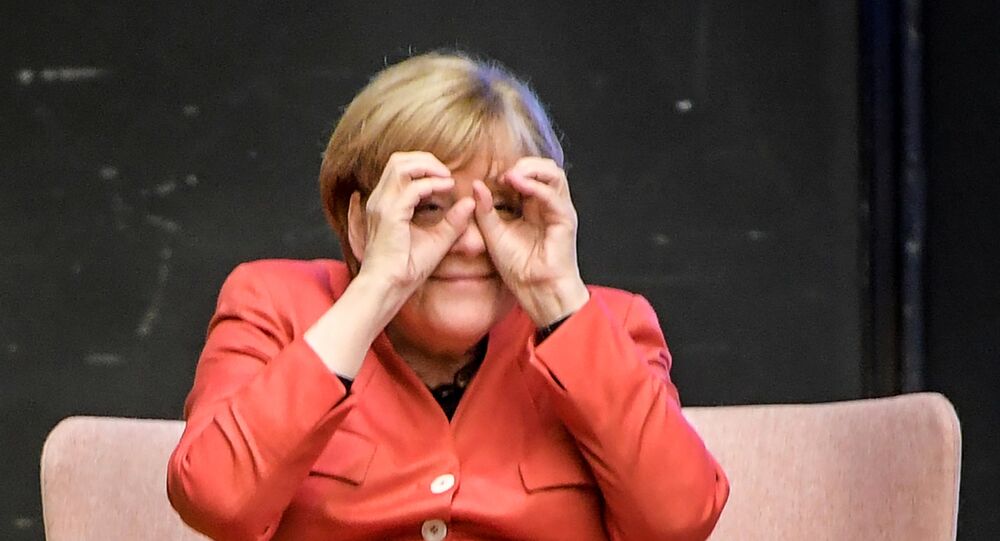 During her visit to Georgia, the German chancellor not only discussed the two countries' bilateral relations, but also took a look at a Russian military base across the border.

As a part of an official visit to Georgia, German Chancellor Angela Merkel was offered to take a look through binoculars across the border at South Ossetia, one of the Georgian territories that separated from Tbilisi after a conflict in 2008, and a Russian military base situated there. The picture of Merkel looking through binoculars didn't go unnoticed by some social media users, who took the opportunity to mock the German chancellor.

😄😄😄 Angela Merkel from Gruzia looking for Russian military base in South Osetia.

Some Twitter users suggested that she was looking for Russian missiles there.

Maybe she's looking at where icbm2 is hiding

Others said that she was looking for Putin…

Several Twitterians suggested that it was totally unnecessary and inconvenient to look at beautiful South Ossetia through binoculars, as she could just have visited it and experienced the hospitality of its citizens herself.

Regular visits by European and American politicians and observation through the telescope towards #SouthOssetia didn't contribute to the development of tourist services at this point. Could provide a soft chair for guests, and also offer tea and coffee.

"Merkel was looking at Russian military base in Tskhinvali through binoculars during her visit to Georgia. Could just have asked to invite her," a user named Katherine Tarakanova wrote.

Following the reports of Merkel's observations, South Ossetian President Anatoly Bibilov invited the German chancellor to visit the country "through the front door," instead of looking at it from the "backyard."

"The times when people looked at stars through telescopes are long gone. Russian army is now new ‘stars' to be looked at," the user named Makarena wrote.

South Ossetia and Abkhazia separated from Georgia and proclaimed independence after the 2008 conflict, which started after Tbilisi shelled the capital of Ossetia, Tskhinvali, killing hundreds of its residents. Russia pushed Georgian forces out of South Ossetia, protecting its own citizens living in it. Russia later recognized the sovereignty of South Ossetia and Abkhazia. Georgia still considers both states breakaway territories.

Georgia lost control over South Ossetia and Abkhazia after a military conflict in the 1990s. Since then both regions demanded independence, but Georgian authorities only agreed to give them autonomy.

'Not Negotiable': Tehran Warns Merkel Not to Link Its Missile Program to JCPOA