Melania Warns Social Media Can be ‘Destructive, Harmful’ as 45 Rages on Twitter

First lady of the United States Melania Trump spoke out against cyberbullying on Monday at a summit in Maryland, warning that social media has the potential to be “destructive and harmful when used incorrectly.”

The Slovenian-born first lady found herself making the anti-cyberbullying remarks — part of her "Be Best" campaign — only shortly after her husband, US President Donald Trump, had lashed out at special counsel Robert Mueller's investigation earlier in the day, calling the legal team "Angry Democrat Thugs." FLOTUS did not mention The Donald in her speech.

"In today's global society, social media is an inevitable part of our children's daily lives. It can be used in many positive ways, but can also be destructive and harmful when used incorrectly," the 48-year-old FLOTUS said. "That is why ‘Be Best' chooses to focus on the importance of teaching our next generation how to conduct themselves safely and in a positive manner in an online setting." 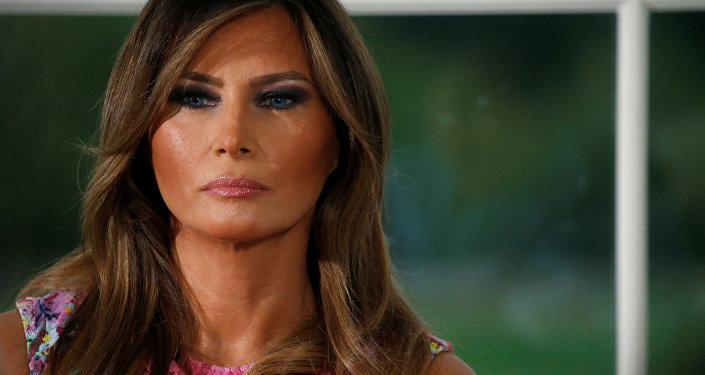 "Let's face it: Most children are more aware of the benefits and pitfalls of social media than some adults, but we still need to do all we can to provide them with information and tools for successful and safe online habits," she added.

During her time at the podium, Melania Trump explained that she'd launched her "Be Best" initiative in May 2018 in order to shine a light "on the many issues facing children today — one of them being the safe and responsible use of social media." According to the White House's page on the campaign, the initiative is meant to teach kids "the importance of social, emotional and physical health."

Although her message likely came from a positive place, netizens weren't exactly cheering her on, especially considering 45's reputation as an online bully.

​Moments after Melania stepped down and allowed other speakers to share their thoughts, the commander-in-chief went back to business and continued his Monday morning Twitter bashing. However, rather than continuing his rant against Mueller and his legal team, Trump criticized former CIA Director John Brennan, calling him a "political hack." He also went in on Justice Department officials Jeff Sessions and Bruce Ohr.

​In response to the former reality star's antics, Stephanie Grisham, spokesperson for Melania Trump, addressed the timing of FLOTUS' speech and her husband's Twitter rant. "She is aware of the criticism, but it will not deter her from doing what she feels is right. The President is proud of her commitment to children and encourages her in all that she does," Grisham said.

Monday, however, was not the first time that Melania offered a message contradicting that of the president. Earlier this month, after POTUS attacked basketball player LeBron James on Twitter, Melania issued a statement praising the Ohio native's decision to open a public school for at-risk students.