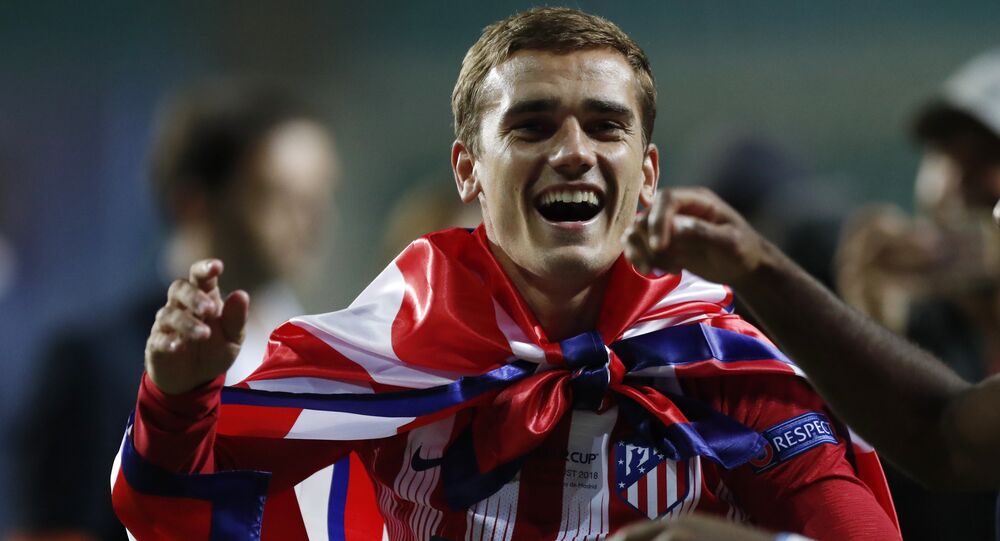 Although the traditional revitalizing mate tea, popular with footballers can been seen somewhere in the background, Antoine Griezmann indulges in his favorite junk food and an enjoyable drink, which he is totally entitled to.

After Atletico Madrid beat their bitter rival Real 4-2 in the Super Cup final in Tallinn on Wednesday, the winning squad’s star Antoine Griezmann posed in the dressing room by their much-awaited trophy, enjoying a large burger and a beer. The French forward, who has continued his glorious summer after the World Cup triumph, can be seen sitting with an Atletico flag wrapped over his shoulders and a medal around his neck.

He also expressed his loyalty to the club online, by posting a possibly pre-prepared cartoon — given the tiniest details present — on Instagram showing him as a triumphant king being crowned by Sergio Ramos, the Real Madrid captain, and accompanying the post with two emojis with their tongues sticking out. Although he later took the “changing of the European crown” post down, some social media users were quick to save and share it.

Atletico owes its latest win to two goals by the club’s other star Diego Costa and successful extra time volleys by Saul and Koke.

The Atletico players left the Estonian capital at night to arrive in Madrid in the early hours of the morning, and were pictured disembarking from the plane proudly wearing special souvenir t-shirts featuring the slogan “Super Campeiones,” Spanish for “Super Champions,” with most of them still wearing their medals on their chest.