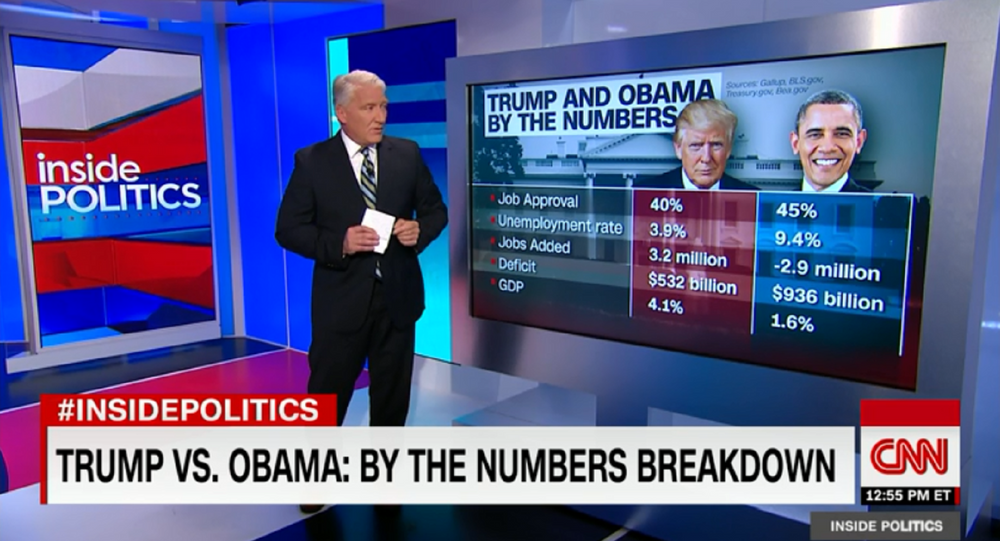 On Wednesday, Donald Trump Jr. posted a doctored image on Instagram, falsely indicating that his father, US President Donald Trump, had a Gallup presidential approval rating 10 points higher (50 percent) than it actually was.

Tens of thousands had already seen the fake news image before it was deleted Friday afternoon. The image, a screenshot from a CNN clip that aired earlier this week, attempted to disprove Trump's claim that that he had better approval numbers than his predecessor US President Barack Obama at this point in his presidency.

​The CNN screenshot features the news station's John King showing a graphic comparing Gallup presidential approval ratings between Obama and Trump. Although Trump outperformed Obama in the deficit, employment rates and gross domestic product categories, Obama was still in the lead on the top line: Job approval. Trump had a 40 percent approval rating in terms of "job approval" compared to Obama's 45 percent during his presidency over the same time period.

​At some point, it appears someone wrote a "50%" over the CNN "40%" for "job approval" for Trump. And this is where social media users, once again, took over and spread the doctored graphic across the internet.

The bogus image wasn't even all that impressive at fooling the masses.

Many noticed that the "50%" was misaligned with the "40%" on the original CNN frame. Additional scrutiny revealed that the background was a different shade of red and the original 40% still showed under the fake "50%"

Donald Jr. later claimed that he was not aware that his retweeted post was fake news.