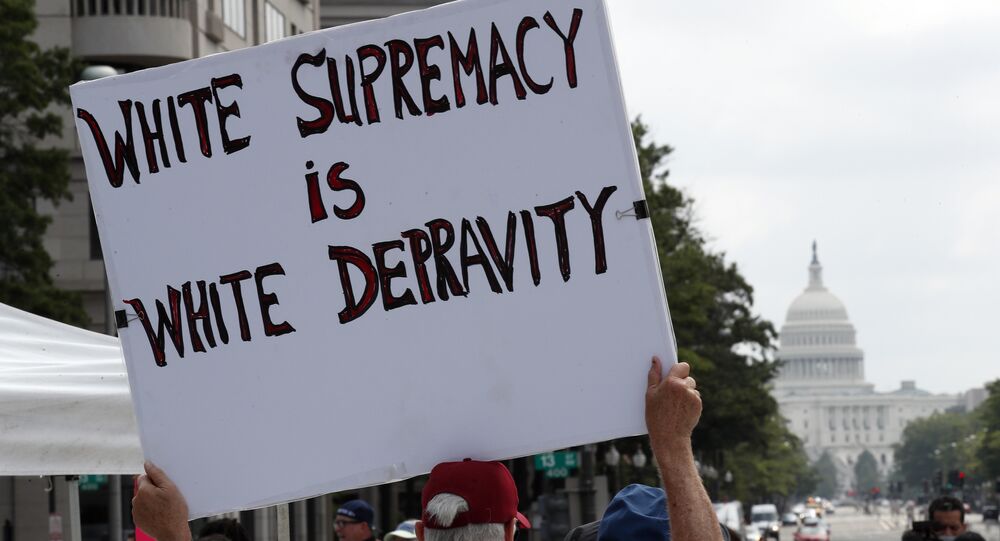 Counterprotesters are gathering in Lafayette Park, Washington DC, next to the White House, where a US white nationalist faction is slated for a late Sunday afternoon gathering on the one-year anniversary of a deadly neo-fascist ‘Unite the Right’ march in Charlottesville, Virginia.

© Sputnik
Unite the Right 2 Heads to DC, Counter-Protesters Gear Up for White Nationalists
While the so-called Unite the Right 2 get-together — consisting primarily of American white-nationalist supporters of US President Donald Trump — is not scheduled to take place until around 5 p.m. in a park directly abutting the White House, opponents to the group's message of racism and neo-fascism began to assemble in the late morning.

The popular DC park — split by the US National Park Service (NPS) and local law enforcement into sections with barriers — reveals a small southwest quadrant designated for the white nationalists, while almost the entire northern half of the green has been designated for what is expected to be a much larger group of counterprotesters, according to local news provider WJLA.

A heavily fenced-in area designated for the white supremacists has been closed to public access, and it has not been revealed what password, document or secret handshake identifies a white neo-fascist marcher and allows them entry into the assigned corral.

The regions set aside to house the white nationalists and the counterprotestors have been separated by a wide buffer zone as well as police barriers, and a grassy knoll and two sidewalks are included in the neutral territory.

According to the permits issued by the NPS, the neo-fascist group expects no more than an estimated 400 marchers. But five additional permits written for various counterprotestor groups — including anti-racist organizations Black Lives Matter and other Antifa cabals banding together under the rubric of ‘Shut It Down DC' — reveal that numbers in excess of 5000 could show up in opposition.

Trump, currently away from the fray at one of his many personal golf courses — this one in nearby Bedminster, New Jersey — is not expected to comment on the march.

Last year, following the tragic events in Charlottesville, Virginia, the US president posted what was interpreted by neo-fascists as support for their views, by tweeting that the blame for the killings was to be placed on "both sides" and that the white nationalists included "very fine people," cited by Abcnews.com.