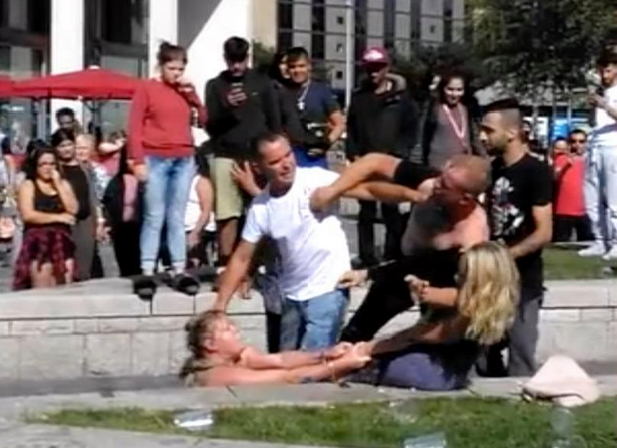 Mixing alcohol and hot weather does seem like a good idea to some pub-crawlers. A vicious street brawl in Bradford's city center was caught on camera; four people who were apparently three sheets to the wind beat each other as onlookers laughed and cheered.

A video has emerged online of a brutal alcohol-induced fight between three women and a man in the center of Bradford, West Yorkshire. The three-minute mobile phone clip is believed to have been filmed outside The Turls Green, a Wetherspoon pub.

The video beings with a woman in a beige dress lying face down on the ground. A man in a black T-shirt can be seen walking in his socks to pick up his shoe, which is lying next to her.

The woman tries to follow him, but she fails to stand up and falls over again, and is cheered on by the crowd.

The footage then cuts out, then the woman in beige is seen climbing up a grass pillar to engage in a melee with another two women. They exchange blows and throw drinks as the conflict escalates into a pile-on.

The man in the black T-shirt gets caught up in the middle of the brawl, and his shirt is torn to shreds.

Bystanders eventually muster the nerve to intervene. The blonde woman, who was hit by a flip flop and fell over several times, retreats from the scene and the video cuts out.

West Yorkshire Police have reportedly arrested the three women and a man, who were later released amid the ongoing investigation.

The episode prompted a bitter reaction on social media, with users calling the brawl "British culture on display."

"This is what this country has come too… we are the laughing stock of other countries. No respect or manners for anyone or anything. I am sure our ancestors must be turning in their graves," a user wrote in comments on The Daily Mail website.

"Boozing and fighting. The only things the British excel at now," another user contended.

British culture on display. It's the same drunken slobs whether in Benidorm, Magaluf or Bradford. https://t.co/Bs6Dh6qgUC