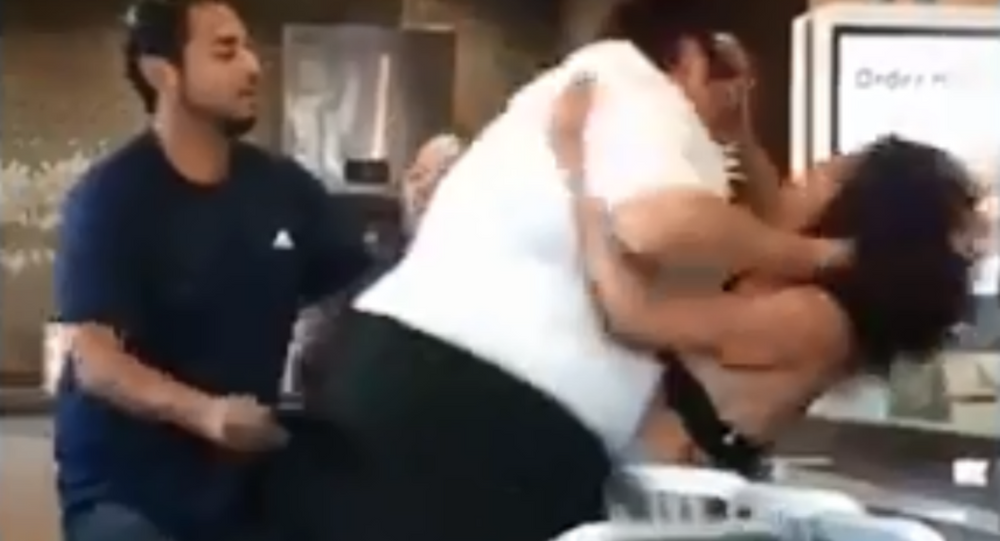 Footage of a Nevada McDonald’s employee laying a beatdown on a milkshake-slinging customer on Wednesday has gone viral, amassing more than 219,000 views this week.

The video begins with both the employee and the customer yelling at one another before the milkshake is brought out and tossed at the worker. The employee gets a whack to the face with a food tray before she tries to shut down the fight by throwing a few punches and slaps. The fight continues despite the customer's top coming undone, and she is later tossed into one of the booths by the employee.

"My momma ain't dead, you respect my momma," the fuming worker yells at the customer. It's unclear what was said about her mother. The disheveled patron responds by picking up a chair, but she's quickly disarmed by the unfazed employee.

Not wanting to walk away without having the last word, the customer continues to yell and taunt the employee with threats of getting the police involved.

"You're not ready, you're not ready," the customer yells. "Kill me, b*tch. Cause that's what all you guys did. Try me. Put your hands on me again and I'll call the cops."

It's unclear if cops were actually called to the scene.

Although fellow employees did try to break up the fight, it did not prove successful. One worker trying to pull the customer away from the scene eventually got into her own fight with the patron.

According to Marie Dayag, the bystander who filmed the altercation, the brawl took place after the employee shut down the soda machine to prevent the customer from using a water cup to sneak some pop.

In a statement released to Sputnik, Brent Bohn, owner of the McDonald's franchise where the fight went down and dozens of others across southern Nevada, said that the company does "not condone the behavior in this video." An investigation into the incident has been launched.

Car Rams Into McDonald's in Latvian Capital of Riga (PHOTO)

Not Lovin’ It: McDonald’s Sued by US Employees Over Workplace Sexual Harassment