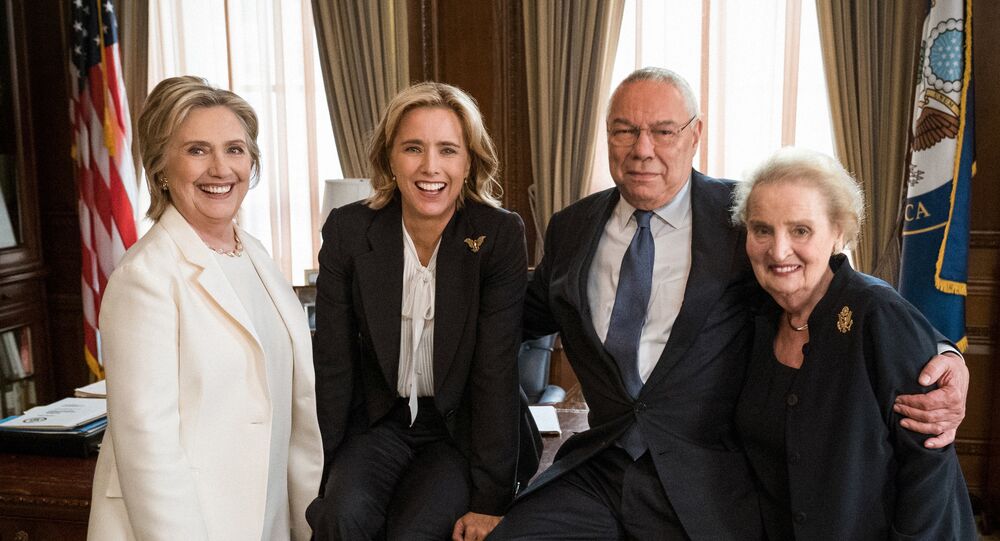 The series, which is entering its fifth season on October 7, will kick off with appearances by the Obama, Bush and Clinton-era secretaries of state, who will help Tea Leoni, who plays fictional secretary of state Elizabeth McCord, respond to a "delicate situation."

The hit CBS drama's twitter page blew up over the news, with Clinton supporters rushing to show their excitement and promising not to miss the season premiere.

Not everyone was excited however, with users soon flooding the feed with a wave of recollections about Albright, Powell and Clinton's roles in the wars in Yugoslavia, Iraq, Libya, and Syria.

No other country celebrates war-criminals like this. This is psychotic. Disgusting.

They played a starring roll in the death of 2,000,000+ innocents; Now @madeleine "500,000 dead Iraqi children was worth it" Albright.
Colin "Iraq has WMDs & is an imminent threat" Powell.
Hillary "We came, we saw, he died hahaha" Clinton are coming to your screens.

In this season, the state department will attempt to enact successful regime change in Syria, Iraq, and Serbia.

Sick, sick, sick. The attempted humanisation and popularisation of people who have the blood of literally millions on their hands. I don't watch this show, but I'd urge all those who do to boycott this episode. These blood-soaked monsters belong behind bars, not in sitcoms.

The news also brought out the Trump supporters gloating over the real estate magnate's unexpected victory over Clinton in the 2016 election.

thats the closest hilary will ever get to becoming prez!!! hahahaha

Hillary Clinton served as secretary of state from 2009 to 2013. In 2011, she lobbied President Barack Obama to stage a military intervention in Libya, which led to the overthrow of Libyan leader Muammar Gaddafi and Libya's collapse into multiple statelets governed by warring factions. The chaos helped to spark the migrant crisis, with many refugees and migrants making their way to Europe from Libyan ports. President Obama would later call the aftermath of the Libya attack the worst mistake of his presidency.

Colin Powell served as secretary of state between 2001 and 2005, and presided over the US's public justification of the invasion of Iraq. In February 2003, Powell appeared at the UN and gave his now infamous presentation on Iraq's alleged weapons of mass destruction program. After the US invasion, the weapons were never found, but Iraq descended into over a decade of chaos, which claimed the lives of over 4,400 US servicemen and nearly 300,000 documented Iraqi civilians and combatants. Powell later expressed regret over his actions.

Madeleine Albright served as President Bill Clinton's secretary of state from 1997 to 2001, and actively lobbied for the 1999 NATO bombing of Yugoslavia, which led to up to 5,700 civilian deaths and serious damage to the country's infrastructure. The NATO campaign included the use of depleted uranium ammunition, which continues to affect the health of civilians in the areas hit. The secretary also attracted controversy over her perceived indifference to the deaths of an estimated 500,000 children who died as a result of US-backed sanctions against Iraq. Albright said that these deaths were "worth it" to contain Saddam Hussein.