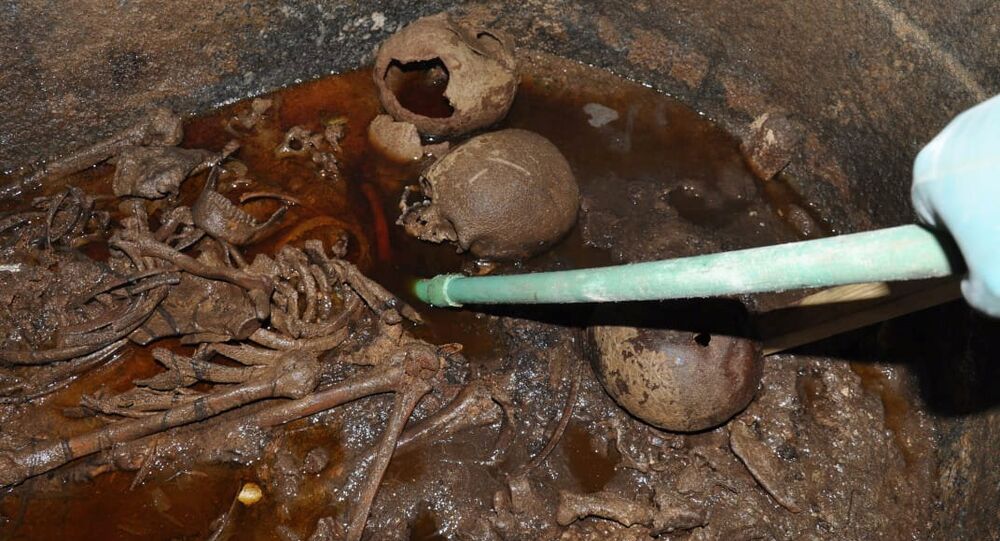 On July 19, Egyptian archaeologists opened a sealed black sarcophagus in Alexandria, the largest ever found in the coastal city. Inside were three mummies, resting in a reddish liquid. A petition is now circling the internet to “let people drink the red liquid” from the sarcophagus in order to obtain the mummies’ powers.

While to some the find in Alexandria at the beginning of the month held enormous historical and scientific significance, when it came to the question of what might be inside the 30-ton tomb, not everybody was excited about the same things.

Some people speculated it could be the final resting place of Alexander of Macedon, who founded the city and built one of the greatest empires in human history. Others thought it might be an ancient pharaoh, reinterred from upriver in Memphis. People were even worried about a curse being released if the sealed casket were opened, Sputnik reported.

​And then there were some other folks, whose primary thought was: "What part of this can I eat?"

​We don't understand it, either. Sputnik reported Thursday that the Egyptian Ministry of Antiquities said the liquid was mostly sewage that had seeped into the sarcophagus through a crack in the side. Still, that doesn't seem to have deterred some petitioners, with one responding:

​While the tomb wasn't the final resting place of a great emperor or king, it did contain the remains of three soldiers, probably of officerial rank, although their names are not recorded anywhere. Egyptologists think they might be from the Ptolemaic or Roman eras because of where the tomb was found.

​Around 18,500 people have signed the petition since Thursday. Petition starter innes mck posted Sunday, "Wow 10k sigs… Thank you so much for all ur deep and personal reasons for wanting to drink the cursed mummy milkshake, I swear I will keep fighting to allow u to sup."

Petitioners seem eager to drink the cursed mummy milkshake, with many commenting things like "Thirsty" and "I crave the forbidden juice."

​Unfortunately for the petitioners, it seems Egyptian officials dumped the water out into the street shortly after opening the sarcophagus.

Trust us, you all dodged a bullet on that one.