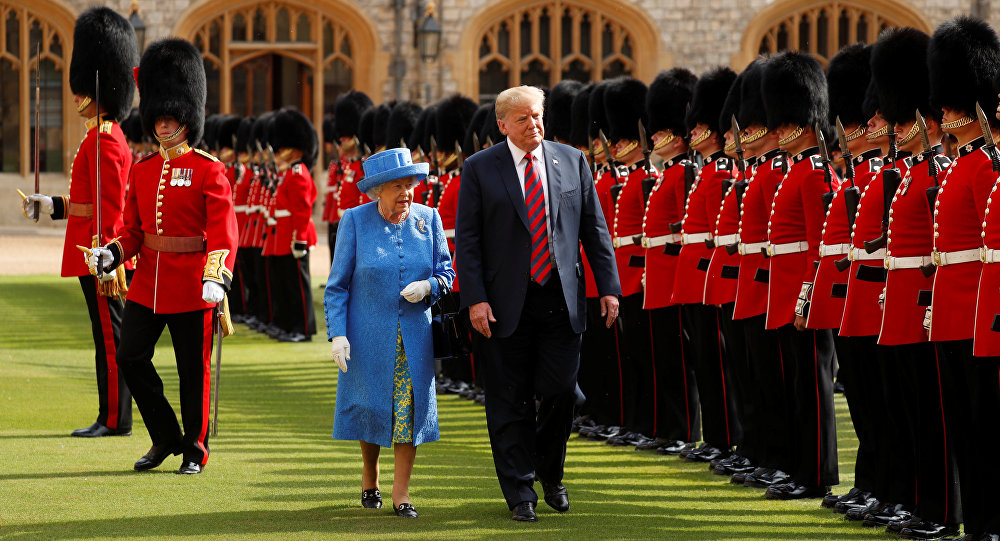 During his visit to the United Kingdom, US President Donald Trump met with the queen of England, Elizabeth II, as well as with UK Prime Minister Theresa May, amid mass street protests staged by Britons angry at the American leader.

Shortly after concluding his official visit to Britain, US President Donald Trump told the media that the queen of England had reviewed the royal guard on the occasion for the first time in the last several decades.

"We met with the Queen who is absolutely a terrific person, where she reviewed her honor guard for the first time in 70 years, they tell me," Trump said.

As many media outlets and social media users pointed out, however, the queen has reviewed her honor guard on many occasions during the last 70 years, often during visits from prominent foreign officials.

Trump: "We met with the Queen, who is absolutely a terrific person, where she reviewed her honor guard for the first time in 70 years…"

Reality: The Queen has reviewed the guard on every official birthday and also during many state visits, including Barack Obama's in 2011. pic.twitter.com/JeUOYBZVd8

Fake News:
Trump "We met with the queen … she reviewed her Honor Guard for the first time in 70 years"

Fact:
She's only been queen for 65 years.
She was photographed reviewing the guard many times over the years. pic.twitter.com/2xm2cBnOgs

When #Trump says "#QueenElizabeth reviewed honor guard for 1st time in 70 years, they tell me" a) it makes him look important b) the "they tell me" part is his #lies disclaimer c) his base takes that statement as truth. He does this again & again & then will back peddle.

"…where she reviewed her Honor Guard for the first time in 70 years, they tell me," Mr. Trump said at the White House Tuesday.

On the day of Trump’s arrival to the UK, on July 13, over 100,000 people staged a protest rally in downtown London, with the public mocking the US president by flying a giant balloon portraying him as a screaming toddler.

Queen of England Might Have Used Jewelry to Troll Trump – Reports