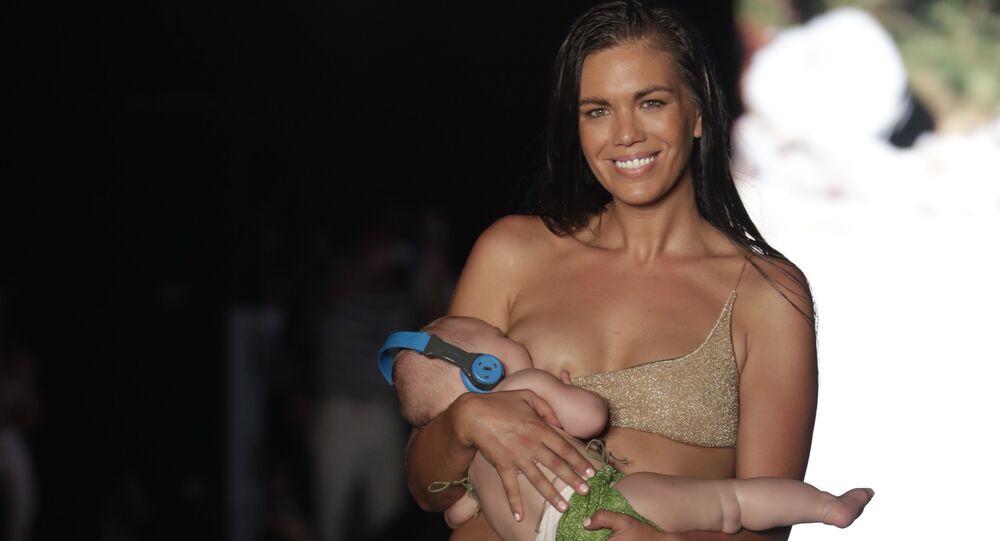 A model at the Sports Illustrated fashion show decided not to abandon her maternal duties in the workplace and strutted in front of spectators in a gold bikini, nursing her baby. Some hadn’t appreciated such a move from the magazine, which is known for its annual swimsuit issue, which features almost perfect bodies on its cover.

Mara Martin turned her catwalk stride into a statement when she decided to take her five-month-old daughter along. The model and new mom was breastfeeding the baby when she strolled onto the runway during the Sport Illustrated Swim Search show during Miami Swim Week.

As the new mom commented on her Instagram account, she was grateful “to share this message and hopefully normalize breastfeeding and also show others that women CAN DO IT ALL!” She praised other participants for looking different from conventional swimsuit models.

A moment we’ll never forget! @_maramartin_ walked the #SISwim x @paraisofashionfair runway show while breastfeeding her daughter. Click the link in bio or swipe up in our story to learn more.

While some admired the move, leaving comments like “What a beautiful statement!” or “Incredible,” others slammed it as a “publicity stunt” and pointed out what SI was really about.

Great tettas but WHY do that, what's the point of what she did other than sexual exploitation of her own gender!

All for breastfeeding; hate stunts.

​“The SI swimsuit issue has been about impossibly beautiful women with outrageous bodies. That is what it is, everyone knows it. Don’t try to change it,” one of the users posted on Instagram.

In June, footage of Canadian Liberal Karina Gould breastfeeding her three-month-old son became the focus of a debate, causing a reaction on Twitter. Gould became Canada’s first federal minister to have a baby while in office.

After she returned to work in May, she brought her son Oliver with her, introducing him to her Liberal colleagues, and to Prime Minister Justin Trudeau.