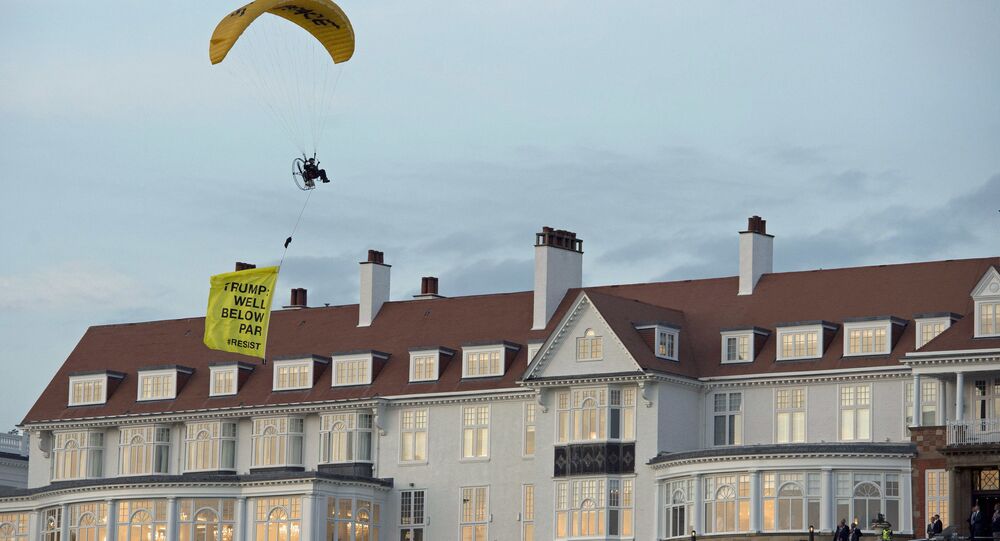 How do you get your message to US President Donald Trump when he won't give you the time of day? You get a paraglider to conduct a flyover with a banner while he's at one of his resorts.

Greenpeace UK upped the ante on Friday after it boldly chose to get a paraglider and fly a banner that came within 200 feet of the president. The banner read, "Trump Well Below Par #Resist."

​Footage of the incident, which took place at POTUS' Trump Turnberry Golf Resort in Scotland, shows 45 being rushed indoors by his security detail as the pilot comes over. A no-fly zone had been implemented by Scottish officials for the duration of the president's stay.

According to USA Today, the pilot flew some three miles from Scotland's Ayrshire countryside to successfully pull off the stunt.

"Trump calls climate change a ‘con job' and a ‘myth'. He pulled America out of the Paris climate accord and overturned the Obama clean power plan that would have slashed American pollution," Ben Stewart, a spokesperson for Greenpeace, told the Daily Record. "He's committed to burning more dirty coal and overturned the ban on offshore Arctic oil drilling. And that's before you even get to talking about separating kids from their parents and caging them."

"Theresa May should not have dignified Trump with a visit to the UK. The vast majority of British people are appalled by his words and deeds. He is, simply, the worst president ever. That's why we flew over him with a message branding him well below par," he said.

Although Greenpeace officials did inform the local police, the police air incident advisor and the Prestwick air traffic control about their plans, a manhunt has since been launched for the pilot.

"There are armed assets protecting the president — both from the US Secret Service and ourselves and the Met Police, who offer a close protection function as well," Mark Williams, the assistant chief constable for Police Scotland, told BBC Scotland. "And there's no doubt anybody who breaches security around him puts themselves in grave danger."

"On this occasion we could assess the situation and we realised there was no direct threat to the president, however, it's absolutely something that is very serious," he added.

The Greenpeace stunt comes as dozens of protests, one which even included a giant Trump baby balloon, were held in the UK against Trump.

The president's next stop in his week-long European trip is to Helsinki,Finland, where he will meet with Russian President Vladimir Putin. Following the meeting of the two world leaders, the commander-in-chief will return to the US.