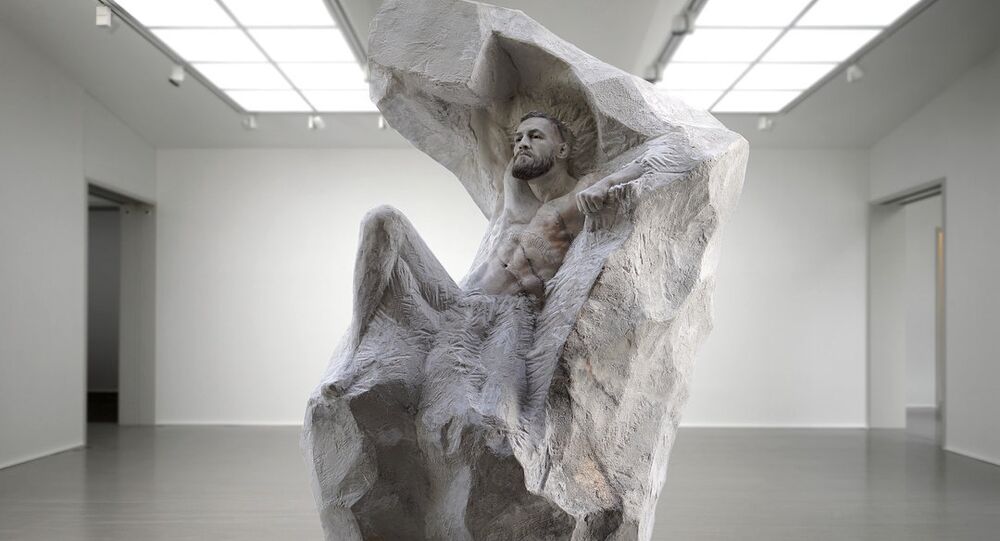 Inspired by classical sculpture and graffiti, a Lithuanian contemporary artist has created a sculpture of the bad boy of mixed martial arts and amateur fashionista. To make the statue to look exactly like the Irish fighter, the creator used real hair for the beard and realistic UV-resistant resin for his eyes.

A hyper realistic statue of UFC star fighter Conor McGregor, who is turning 30 on July 14, will be on display in a London gallery until September. The portrait of the fighter, bursting out of the marble plinth, has been created by Birmingham-based Lithuanian contemporary artist Edgar Askelovic, working under the alias Aspencrow. He plans to present the piece “Atlas,” as he called his tribute, to McGregor.

The sculptured present, which weighs about 100 kg, costs about $66K.

"He is a phenomenon of our time — not just a smart athlete, but also a visionary. To create the piece, I looked back to antiquity, when athletes were immortalized in sculptures as gods. And I combined some details from a Michelangelo statue with modern day graffiti to capture the present day's warrior sensibilities,” the artist told the English newspaper The Sun.

Sorry my friends, I just love to show off! @thenotoriousmma sculpture in process! 🤓👍🎵Oliver- light years away 🎵@jdmalatgallery 🏛

@thenotoriousmma face is done. Now preparing for a mold! 🤓👍@jdmalatgallery 🏛

The sculptor even used real hear for McGregor’s beard and lashes, and made the eyes look hyper realistic with UV-resistant polyurethane resin.

He also decorated the marble plinth with McGregor’s Gorilla tattoo.

“People of our generation grew up on graffiti and hooliganism, so I’ve displayed part of his tattoos on his back in graffiti,” the artist said, as quoted by the newspaper.

Interpretation of Conor McGregor in sculpture by @aspencrow @thenotoriousmma 🏛 @jdmalatgallery

The piece of work has been too good a laughing matter for social users to skip.

Conor McGregor hasn't fought in the UFC for so long he turned to stone. pic.twitter.com/xVRXaUW3g4

We all know it would be Golden pic.twitter.com/GhTBqNTeVW

(1) Conor McGregor is getting a statue of himself for what? What has he really done???? But people who really made a difference Mother Theresa, or Princess Diana (I can go on and on) will only be remembered if people have the knowledge to know of them, but he gets a statue 🤯-

​References to the 2018 FIFA World Cup couldn’t be avoided.

Conor McGregor has a statue being unveiled in London this weekend. I think we all know who it should really be of! #ItsComingHome 😂 pic.twitter.com/7UUe9Nxokl

​29-year-old McGregor is currently signed to the Ultimate Fighting Championship (UFC), where he competes in their lightweight division and held the champion title till January 2018. His MMA record comprises 24 fights, including 21 wins and 3 losses.

Nurmagomedov to McGregor: "Beg Me!"