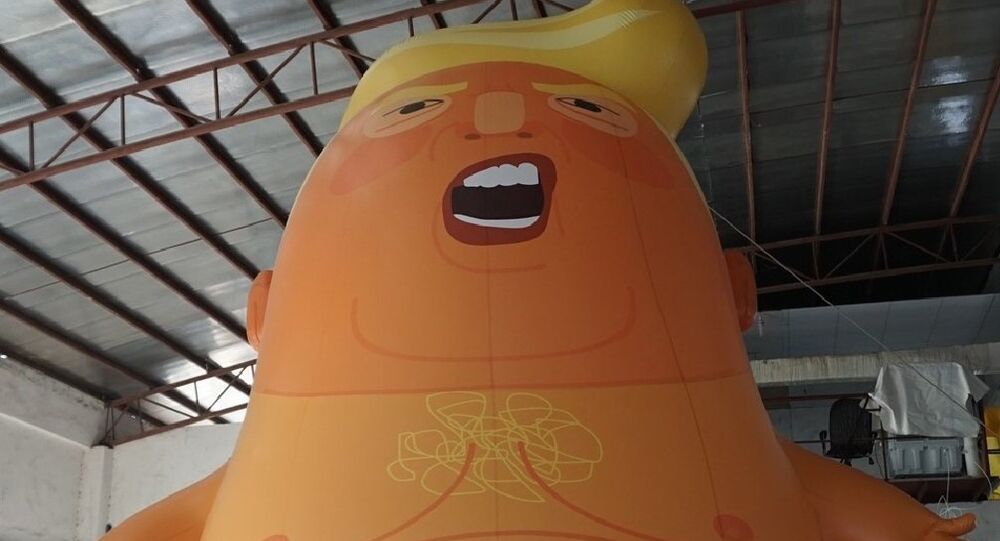 The US president and mayor of London had previously been engaged in a dispute over the respective security and migration policies of the US and UK after the 2017 London Bridge attack.

London Mayor Sadiq Khan has given a green light to organizers of an anti-Trump protest, who plan on launching a 6 meter tall balloon in the form of a "baby Trump" into the sky above the UK capital on the day of the US president's visit there. The organizers themselves claim that it will be a peaceful protest against Trump and his policies.

The move by London's mayor was, however, not welcomed by supporters of the US president. Former United Kingdom Independence Party (UKIP) leader Nigel Farage slammed the move by Sadiq Khan as "the biggest insult to a sitting US president ever" and suggested that such wouldn't be the case if it were Obama and not Trump.

Would this be happening if it was Obama? Makes London look ridiculous.

Trump's supporters took it to the Twitter to express their outrage at London's Mayor decision.

What is #SadiqKhan doing in allowing a giant baby #Trump balloon to fly over #London when the #USA #President arrives? It's juvenile, disrespectful and offensive. There are ways to demonstrate. This is not one of them. Grow up Mayor!

The Trump baby balloon is an insult to his office as well as to him personally. In a free-ish society we do make fun of our politicians. But those insulting Trump, who has improved the US economy, are themselves blind fools. I wouldn't want to be stuck in a lift with any of them.

When the ignorant London Mayor decided to attempt to humiliate president trump with a pink baby balloon with his head on it, the people of this country immediately crowd funded — raised over 10k pounds and are creating a balloon ridiculing the Muslim mayor.

Kahn is a disgrace to the world…. https://t.co/1Mb2KKKjyu

The US president's supporters in London found another way to express their discontent, namely by launching a "Sadiq Khan baby balloon" as a counter-protest. The initiative has already gathered enough money via a crowdfunding platform, but is still awaiting permission from London authorities.

RT @freespirited_p: The campaign for the Sadiq balloon to counter the ludicrous Donald Trump balloon has smashed targets. The additonal funds are for a pro brexit balloon so keep going folks

Going to love watching Khan try to refuse permission for this

US President Donald Trump will arrive in the UK on July 12, but most of his meetings are scheduled for July 13 and will take place mostly outside London, so he will probably miss the launch of the balloon. Media reports suggested that Trump is seeking to avoid potential mass protests in London during his visit, but US Ambassador to the UK Woody Johnson has denied the allegations, saying that "The President is not avoiding anything."