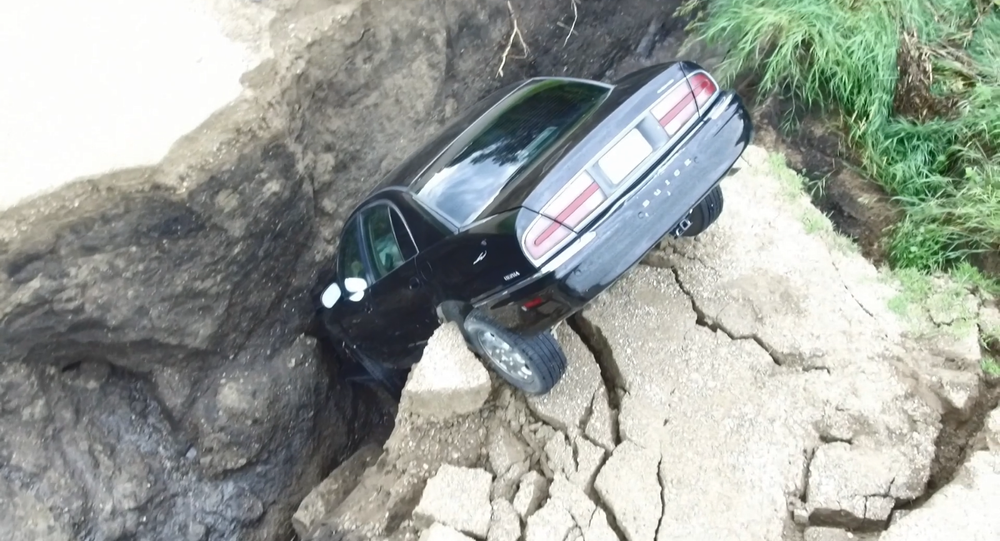 WATCH: US Teen Escapes Car Unscathed After Plunging Into Hole Caused by Flooding

Torrential rains earlier this week caused flooding across southern Minnesota, including near the town of Renville, creating a huge hole into which an unsuspecting newbie driver accidentally plunged his Buick Tuesday morning.

While the 16-year-old driver's name has not been released, his grandmother, Candace Leopold, spoke to local media about the incident, the aftermath of which the Renville County Sheriff's Office captured on video using a drone camera.

Leopold told CBS 4 local that her grandson was on his way to work on a farm north of Redwood Falls when the car plunged into the washed-out hole, which was created when a culvert under the road was swept away by flood waters. Local rainfall that night was reportedly as high as 7 inches.

If you're trying to wrap your head around what that looks like, this video unrelated to the incident, shot by Maine television station WMTW-8 in 2008, shows the process of a culvert washing out and the road subsequently collapsing, which is not actually a sinkhole but a "piping feature."

The teen lucked out, though, as the hole wasn't even as deep as his car is long. He escaped out the back window, according to his grandmother.

The Renville Sheriff's Office posted the video on Facebook Tuesday, noting in the description that he "was very lucky to have escaped without any injuries" and that the teen was wearing his seat belt and his airbags properly deployed.

While most of the comments on the video are simply local wellwishers, the top comment noted that "It's a Buick Park Avenue. I bet you could just back it right out."

No word yet on whether the young driver has attempted that form of auto rescue or if he just called a tow truck.