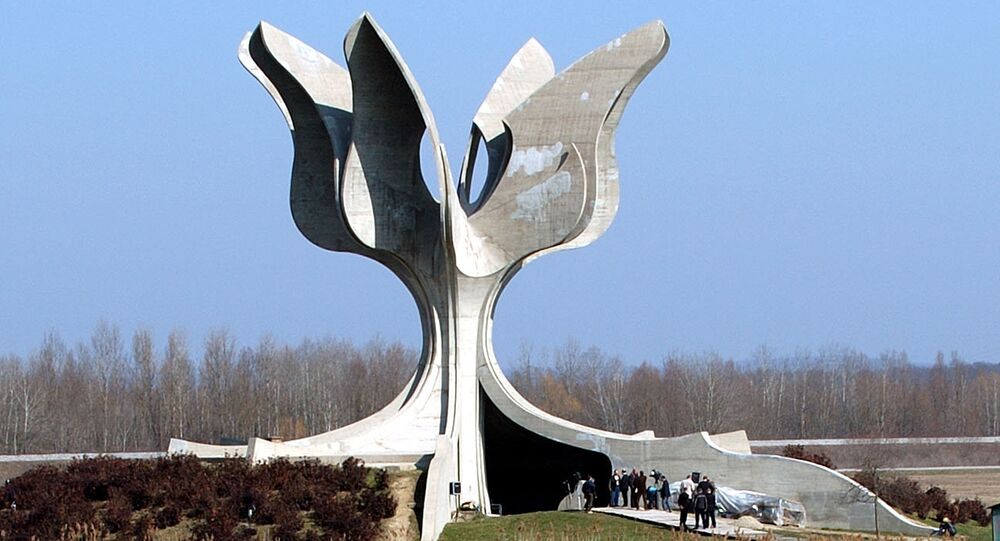 Valley Eyewear chose the Croatian concentration camp Jasenovac, where more than 80,000 Serbs, Jews and Roma were killed by Nazis, to film a promo for its glamorous $200 glasses, enraging the public with “out of touch” marketing.

Valley Eyewear launched a commercial campaign featuring the memorial in the former death camp Jasenovac in Croatia – a place described in their promotional message as “one of World War II's most historic and darkest locations." In the video, models in high-end sunglasses walk around a concrete room and structures, than head away from the notorious camp’s Flower Memorial; these images featured on the company's web-site and in its social media accounts.

Other shooting locations included the otherworldly Dzamonja memorial in Croatia, dedicated to partisan fighters against Nazis, and the flying saucer-like Budludzha monument in neighboring Bulgaria, dedicated to the founders of the nation's communist party.

The use of the death camp in the video clip prompted a backlash on social media as users, enraged with the exploitation of one of the most tragic sites of the Holocaust, slammed the company and insisted on an apology.

Stop using this symbol of the suffering Serbs,Jews and others in your campaign!
Do yo know what the #Holocaust is?
@valleyeyewear pic.twitter.com/MgbvUW1ztj

Wow that is disgusting.

This company, @valleyeyewear, is making a profit on the monuments to the victims of fascism. On locations of the mass war crimes committed during the WW2. And @VladaRH and @MVEP_hr are, of course, not doing anything about it. Shame, shame, shame, all of you! pic.twitter.com/vBDcl0oY6R

Now @valleyeyewear needs to take down the remainder of misused images featuring #Yugoslavia ‘s WWII monuments from their website and social media platforms and apologize publicly for their insensitive actions. #spomeniks

Some insisted on boycotting the glasses.

@valleyeyewear Shame on you to use Holocaust Jasenovac memorial where Nazi-Croatians murdered 600,000 Serbs, Jews, Roma. DO NOT BUY valleyeyewear!!!!!

​The outrage forced Valley Eyewear’s management to apologize for its “out of touch” marketing and delete the ad from its social media accounts as well as its Twitter page.

"We didn't know it was a death camp at the time. We didn't want to offend anybody, we're a respectful brand. I apologize to anyone who's offended," company’s founder Michael Crawley told the BBC.

In his comment to the German news outlet DW, he also stated "a few images have been taken completely out of context." According to him, he and co-producers travelled across the territory of former Yugoslavia to shoot the sites of futuristic monuments, representing the so-called Spomenik architecture, which date back to Tito's Yugoslavia. But one of them happened to be the immense Flower of the Jasenovac concentration camp, where thousands of murders were conducted during World War II.

Established by the Nazi’s local Ustasha collaborators in Croatia, Jasenovac operated between 1941 and 1945. The Ustasha started out as a terrorist organization in 1929 with an ideology that blended the fascism of neighboring Italy with militant Catholicism and Croatian nationalism, and was appointed to rule Croatia following the Axis invasion of Yugoslavia. The regime murdered between 77,000 and 99,000 people there, most of them Serbs, but also Jews, Roma and other non-Catholic minorities, according to the United States Holocaust Memorial Museum.