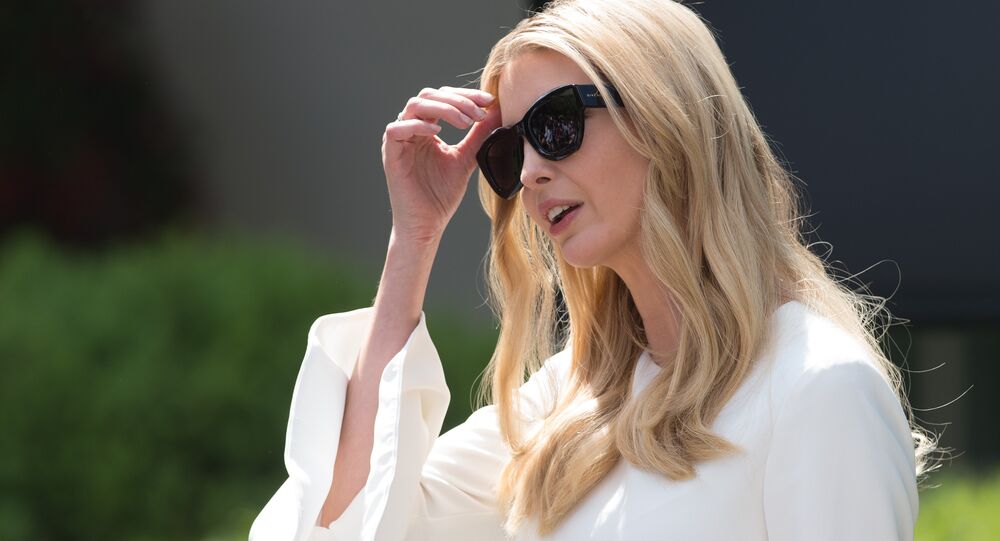 Michelle Wolf, who landed in hot water after her choice of jokes at the White House Correspondents' Dinner, came up with a list of the best insults against the US administration officials attending her show. The comedian aimed several remarks at the president’s daughter and senior advisor, triggering public outrage.

Following the incident with US Administration Press Secretary Sarah Huckabee Sanders, who was denied service in a restaurant amid a scandal involving the separation of migrant families, comedian Michelle Wolf presented a televised segment, in which she expressed how White House officials and politicians should be insulted.

She paid particular attention to Donald Trump’s daughter Ivanka, who’s also a senior advisor to the US president. She generated several jokes comparing her with a sexual transmitted disease. She suggested addressing Ivanka, when one meets her, as follows:

“Ivanka, you’re like vaginal mesh [implant used in pelvic surgeries]. You were supposed to support women, but now you have blood all over you and you’re at the center of a dozen lawsuits.”

She later elaborated: "Is your nickname herpes? Because you are not necessary the most dangerous person in the Administration, but you are very unpleasant, totally incurable and you always show up when we are about to get f****d."

The remarks were immediately slammed as vulgar on Twitter, where users criticized Wolf’s comments.

Michelle Wolf: "Look at me. Pay attention to me. I am relevant because I say mean things and call it comedy"

When they go low, we go high. I seem to remember a prominent Democrat saying this.

Some suspected that she was driven my jealousy rather than differing political views:

Michelle Wolf is jealous and will never be the woman Ivanka is. Here low life attack shows that she lacks class. Pathetic

And questioned if the verbal attack would face criticism from women:

Or fire back at Wolf:

Michelle Wolf looks like she knows ALL about herpes.

Wow..liberal progressive comedian, who besides being not funny is vile, vicious, crude, rude, and totally obtrusive. With Max Waters, Michael Moore, and the other vacuous celebs, they are setting the tone for our nation’s discourse. This is all not going to end well for them.

Some criticized Netflix for broadcasting her show.

I’m so tired of name calling on both sides. I seriously don’t understand why any of it is acceptable. I don’t know this “comedian” nor do I care to, but why are we tolerating it?

Netflix is starting to piss me off (but I’m addicted… https://t.co/IBCv6PoHPa

Hey @netflix it is time to send this horrible human being packing. #NoMoreWolf https://t.co/3Ebp3UWqXV

Why anyone but the hard-left pays for #netflix is beyond me. They've never gotten a dime of my money and never will. #boycottnetflix #obama #MAGA # KAG

@reedhastings Does this disgusting, hate-filled, vile woman (I won't even mention her name) represent NetFlix values? This is NOT "Comedy"- "Ivanka, you’re like vaginal mesh. “Is your nickname herpes?" “prettiest tumor in a swiftly moving cancer.” @Potus #MAGA #WontWatchNetFlix

Another example of why I canceled @Netflix months ago and never looked back!!!

Wolf is filthy, vile, and corrupt.

Others defended Wolf, praising free speech and her sense of humor.

Michelle Wolf is NOT backing down!
That’s because she is a STRONG WOMAN utilizing her right to FREE SPEECH!@michelleisawolf https://t.co/zELciEsxwg

In June, Ivanka Trump was called by Samantha Bee  a "feckless c*nt" – a term that the BBC described as "widely viewed as the most offensive epithet to call a woman" – as the comedian chastised Donald Trump’s daughter over the migrant issues in the United States. Just several days after this remark, another punch came from MSNBC journalist Nicolle Wallace who asked a colleague from Vanity Fair, Emily Jane Fox, why Ivanka and Melania Trump had not reacted to Rudy Giuliani’s recent remark that he respects only “beautiful women and women of value,” suggesting,  “Are they numb, are they dead inside, are they paid off?”

Michelle Wolf made a splash on social media outlets after her roast at the annual White House correspondents’ dinner. She raised questions in the media and on Twitter with some of her insults.

"Ivanka, she was supposed to be an advocate for women but she is about as helpful to women as an empty box of tampons," the comedian said.