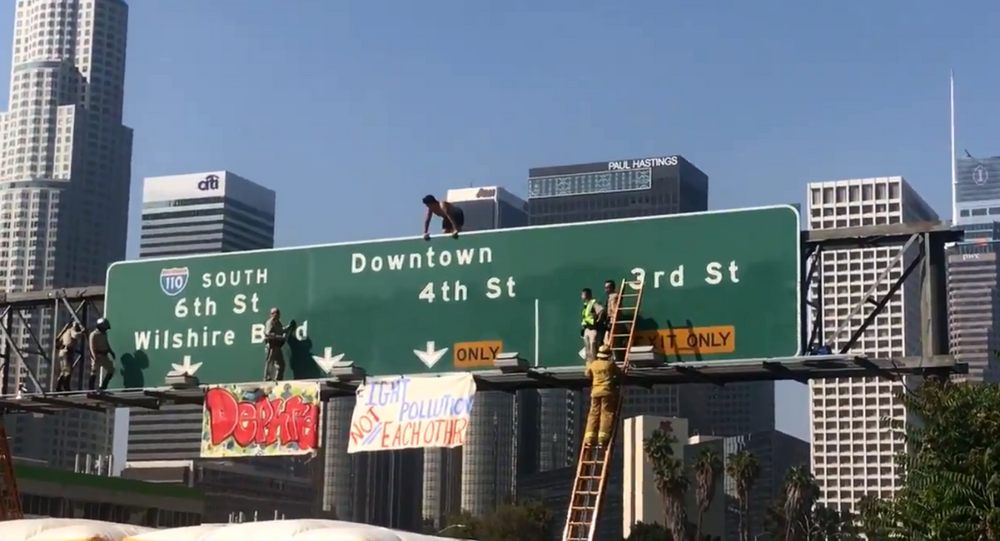 Sporting only his boxer briefs and sneakers, aspiring rapper Dephree shut down the southbound lanes of Los Angeles' 110 Freeway on Wednesday by climbing on top of traffic signs, dancing, shouting from a bullhorn and unveiling his anti-pollution posters.

The artist, who was later identified by California police as Alexander Dunn, began his stunt by scaling the Beaudry Avenue exit sign at around 8 a.m. local time. For the next two hours, the 29-year-old wannabe rapper created a massive traffic jam.

​Footage posted on social media shows Dunn talking to cops and firefighters as emergency responders began inflating a cushion and setting up ladders.

​According to the LA Times, Dunn's publicity stunt was recorded by his team. The footage will be added to a music video that is expected to be released Wednesday evening. Banners included in the recording read, "Fight pollution, not each other," and "Give a hoot, don't pollute."

​Witnesses told the Times that Dunn alternated between shouting about himself, love and God when he was not engaged in a bit of rapping. When the yelling and rapping became too tiresome for Dunn he would reportedly sit down and vape.

By the time the clock struck 10, Dunn agreed to come down. But don't get it twisted folks: rather than taking the ladder down, this fella opted to do a backflip off the traffic sign onto the inflated cushion.

​Once back on solid ground, authorities placed him in handcuffs and directed him to an ambulance. He was later charged with suspicion of delaying a police officer, trespassing on state property and failure to obey a regulatory sign.

Frustrated commuters were later allowed to return to their regularly scheduled traffic jams on the 110 roughly 30 minutes after officials cleared the area.

Nobody Likes It: California Moving to Eliminate Daylight Savings Time