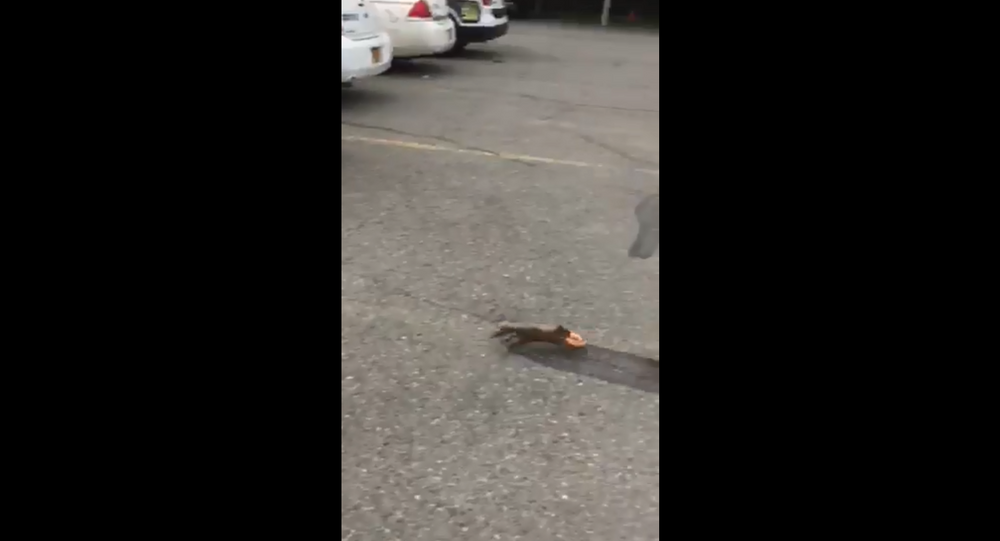 Police in Anchorage, Alaska, are on the hunt for a criminal rodent-at-large. Officers caught an unknown squirrel robbing one of Anchorage’s finest of his morning meal on camera in an act of audacious criminality that has surely left the town grappling with concerns for their safety - and their breakfasts.

"Seriously. He stole a perfectly good donut. FROM A COP. That's a straight-up felony. Also… it's rude," the police department posted on Facebook alongside video providing smoking gun evidence of the scandalous squirrel's heist that will surely get him indicted. But for now, he's still one the loose.

The video begins with an officer walking through a parking lot of police cruisers. From a distance, the video shows the squirrel scurrying about, evading police by hiding under cruisers. The officer remains in hot pursuit as he eventually comes within a few feet of the furry felon, getting irrefutable footage of the squirrel's scrounging.

The suspect takes one good look at the officer before bolting away, outrunning the copper. Towards the end of the hair-raising footage, a pigeon can be seen swooping down nearby the squirrel. A possible co-conspirator? Twitter thinks so. One user tweeted "Well there was air support at the end of the vid! That bird though!"

No shortage of social media users aired their support of the distressed officer, with calls to get that squirrel off the streets.

Others noticed the rodent's "glazed eyes" and generally squirrelly behavior, a possible indication that the it could have been on drugs at the time, or simply "nuts."

As with any police video, opinion was divided. Radio station KFI AM 640 tweeted that Donut Squirrel is "the hero we don't deserve, but need right now."

Others seem to think there's a larger conspiracy at play.

In any case, it isn't clear how police were able to catch the thief in the act. Perhaps they had a rat.

Back for More: Squirrel Swipes Some Gourmet Goodies

Squirrel Breaks Into a House in the US, Attacks Police Officer