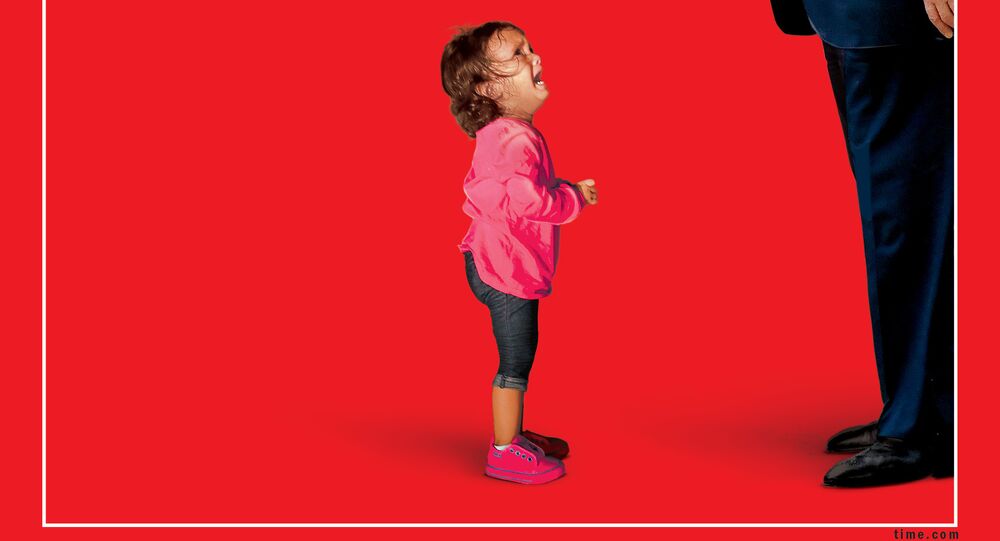 In light of the US administration’s zero-tolerance immigration policy, Time magazine announced a new cover featuring President Donald Trump and a crying toddler – but a key detail might have ruined the intent of the image.

Time magazine juxtaposed the photograph of a two-year-old Honduran girl, who sobbed while her mother was being detained and searched by US border patrol officials with the image of the president looking down at her.

The picture was taken by Getty Images photographer John Moore and has hit international media, with the child becoming the face of the family separation policy.

TIME’s new cover: A reckoning after Trump's border separation policy: What kind of country are we? https://t.co/U4Uf8bffoR pic.twitter.com/sBCMdHuPGc

And while many praised Time for a “powerful” cover, the girl’s father has revealed to The Daily Mail that the girl was never separated from her mother who tried to cross the border, and they remain together.

Denis Javier Varela Hernandez admitted that he hadn’t heard from his spouse, Sandra, for nearly three weeks until he saw Moore’s photo.

“You can imagine how I felt when I saw that photo of my daughter. It broke my heart. It’s difficult as a father to see that, but I know now that they are not in danger. They are safer now than when they were making that journey to the border,” he said.

It appears that Sandra did not tell him that she was taking their daughter and leaving for the United States to seek political asylum, and he heard from friends that she had paid $6,000 for a “coyote” – a smuggler who helps migrants cross the border.

Once the real story behind the viral picture came out, Twitter was inundated with reactions. Many took aim at Time, mocking and digitally altering the cover:

You got the edited meme… sorry Tim… and now the rest of the story!!!!! Paul Harvey version!!! pic.twitter.com/13pT5vCGbA

Twitterians accused the magazine of spreading fake news and using that cover over and over again despite the fact that it’s been reported that the photo of the toddler did not portray a separation:

Sooo… the little girl on the cover of time was never separated from her mom. Tough break for #FakeNews…

Someone tell Time magazine the reason they’re fake news and dishonest is found on their cover showing a crying little girl NEVER seperated from her parents. Playing on liberal ignorance IS fake news. https://t.co/D3iuFzEg5t

And the photo is used over and over and over, including on the House floor…
It's been reported for days now, by the way, that the photo was not depicting a separation. Yet it's on the cover of @TIME magazine. https://t.co/SA24XLznCB

You mean the photo of the girl separated from her mother that was a complete fabrication and never happened?

It only impacted because it was a lie… that little girl was never separated from her mom. We used her as bait. That’s just wrong. God is watching. Aloha

@TIME your cover is pure left propoganda. It’s sick, twisted and evil. You guys just don’t get it. What is wrong with you? Why do you keep hating this President when all he is trying to do is his patriotic job? #Time @realDonaldTrump

That can't be true because I saw this on CNN pic.twitter.com/WGvkFPCenJ

Others, however, said that there was no proof of non-separation because the father didn’t speak to his family personally and was even unaware that his wife had been planning to take such a journey:

The photographer said this was BEFORE she was told to put down her child. That photo is also of that night, not proof of non-separation.

How about we actually hear from the mother before you claim victory?

So we still have no information on her whereabouts or whether there was a separation at the border.

How do you know that they were never separated at any time by authorities? What's your source? The daily mail article that you reference doesn't say anything like that. As a matter of fact, it says that the father of the child says that he's had no contact with them.

Earlier this week, Trump signed an executive order to stop the splitting up of families at the US-Mexico border after his administration faced an avalanche of criticism over the recent separation of some 2,000 children from their parents.