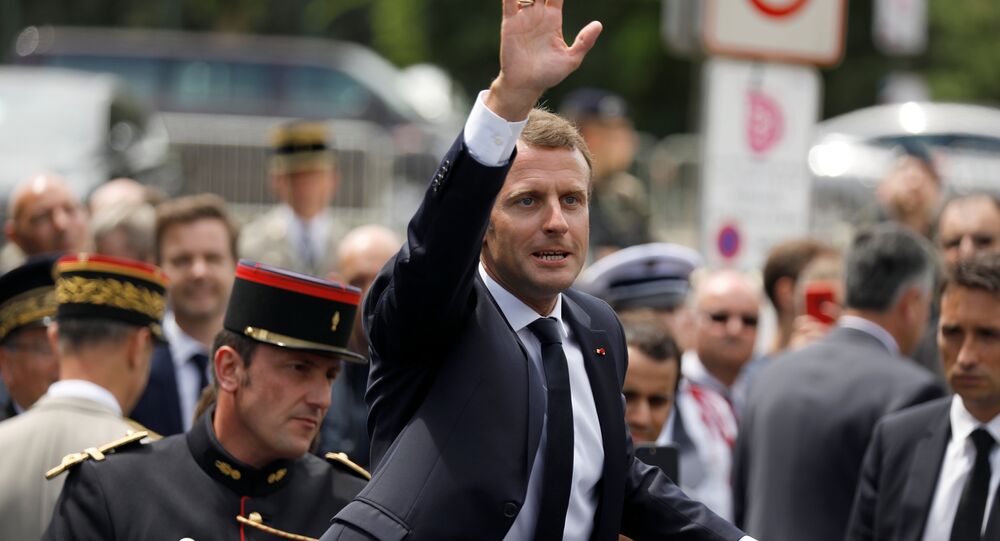 The French president was quick to launch into a rant about proper behavior at an official event after a boy in the crowd said to him “Ça va, Manu?” – meaning “How’s it going, Manu?”

President Emmanuel Macron was attending a ceremony at the Mont Valerien memorial in Suresnes, marking the 78th anniversary of General Charles De Gaulle’s call to resistance, when a young man in the crowd caught his attention by calling out, “Ça va, Manu?” [“How’s it going, Manu?”]

The sharp-tongued president did not hesitate to take a moment and teach the cheeky teen, who was also captured singing a few lines from the socialist anthem, The Internationale, a lesson about manners.

“No, no, you are here at an official ceremony. You can’t just behave like that. You can act like a clown, but today it’s the ‘Marseillaise’ and the ‘Partisans Song’ we’re singing. You address me as Mr. President of the Republic or Sir, okay?” Macron told the boy abruptly.

The teen nodded and agreed with what the president had explained to him, but Macron went on to lecture the kid.

“You need to do things the right way. The day you want to start a revolution you study first in order to obtain a degree and feed yourself, ok? And then you can lecture others,” Macron proceeded with his coup de grace.

As the video of the incident emerged on social media, the Twitterverse appeared to be divided on the matter; while some said that Macron’s reaction was unnecessary and supported the kid…

Emmanuel #Macron’s reaction was quite stupid when the boy asked him “Ca va Manu?” In Britain, people would’ve laughed. When David Cameron was Prime Minister, he was often greeted by “Hi Dave!” He didn’t care about it. #France #18juin1940 #18juin

He has apologized, but yet Macron continue his useless speech and humiliate him in front of the camera. it's so much easier to harass a child (:

“He was captured on LCI television singing the words of the international socialist anthem before asking the president, ‘Ça va Manu?’”

…others argued that one doesn’t address a president by his first name:

TWEET: “I am not pro-Macron but I agree with him. One doesn’t address a president like that. The young man who lacks education will now think about it twice."

TWEET: “Whether we like Macron or not, there is a form of respect that is obligatory. The young man is still facing the sitting president of France and he cannot call him by his first name.”

Imagine if a British teenager had addressed the Queen as "Hey, what's up, Lizzie?" while singing the Internationale. Like Her, Macron is a head of State, so no "Call me, Tony" territory.