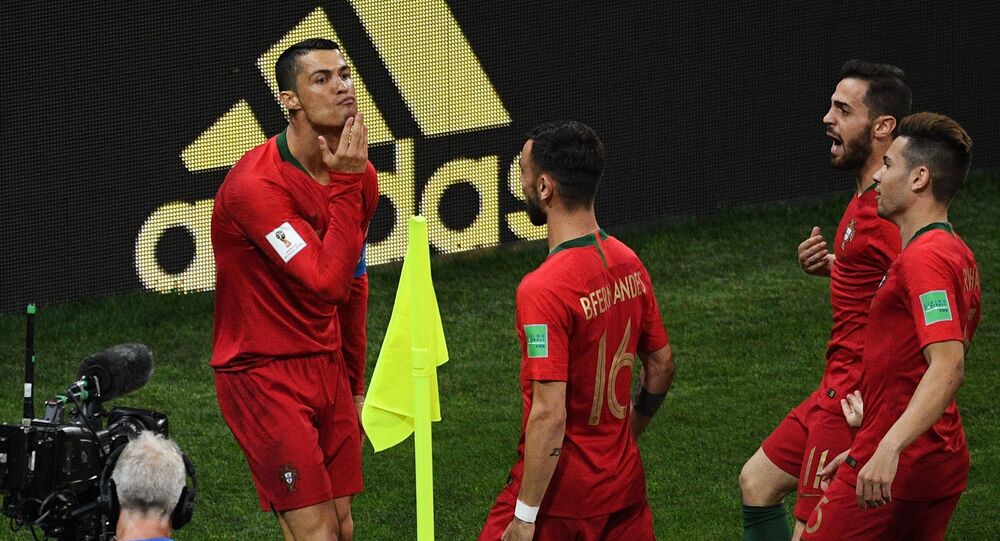 After the Portuguese football star added another record to his profile with a World Cup hat-trick, his gesture during the game against Spain prompted social media rumbling. Some are convinced that Cristiano Ronaldo teased his long–time rival, Argentinian Lionel Messi, dubbed “greatest of all-time” in the latest ads.

Portugal’s forward Cristiano Ronaldo leaped into the air and stroked his chin after he scored the first goal in the game with Spain at the 2018 FIFA World Cup, which ended with a 3:3 draw. Although the soccer legend, regarded to be one of the world’s best players, scored two more balls and got his team a point, it was his field antics that excited netizens. Some Twitter users read his GOAT move as a message to Argentina’s Lion.

The abbreviation, which means “Greatest of All Times” has been used in an Adidas campaign starring Ronaldo’s long time competitor. Barcelona’s Messi, also regarded the world's best soccer player, posed with a goat for the ad, so Twitter suspected the Portuguese mocked Argentinian stating he is the GOAT here.

GOAT stands for greatest of all time so people are saying ronaldo done it to signify a goat beard! Clever celebration if you think about it 😂😂🐐🐐🐐🐐

Ronaldo tried to do the ''Goat'' celebration after his hattrick today —shortly after Messi's goat photoshoot.

Earlier, Ronaldo had done the shirt pulling celebration, again, right after Messi did it.

Messi lives in his mind. pic.twitter.com/3p2Z3I3fOn

Ronaldo doing a GOAT celebration after a recent photo shoot with messi and a GOAT in it. Loool Messi living in his mind 24/7 rent free pic.twitter.com/hCtkOFoZUK

Ronaldo tried to do a GOAT celebration.
You never say you're the GOAT. People decide for you, not you. pic.twitter.com/4dKgpes4Dn

​Some already predict a new trend is born.

Won’t be long now until children up and down the country are recreating the #Ronaldo Chin Stroke celebration! ⚽️😂 #GOAT 🐐

​Others are already longing to see how Messi gets back at Ronaldo during today’s game between Argentina and Island.

Will be funny if Messi scores an absolute worldy goal and does the GOAT beard celebration back at Ronaldo!

​Argentinian national team is having its opening match of the 2018 FIFA World Cup against Iceland in Moscow.