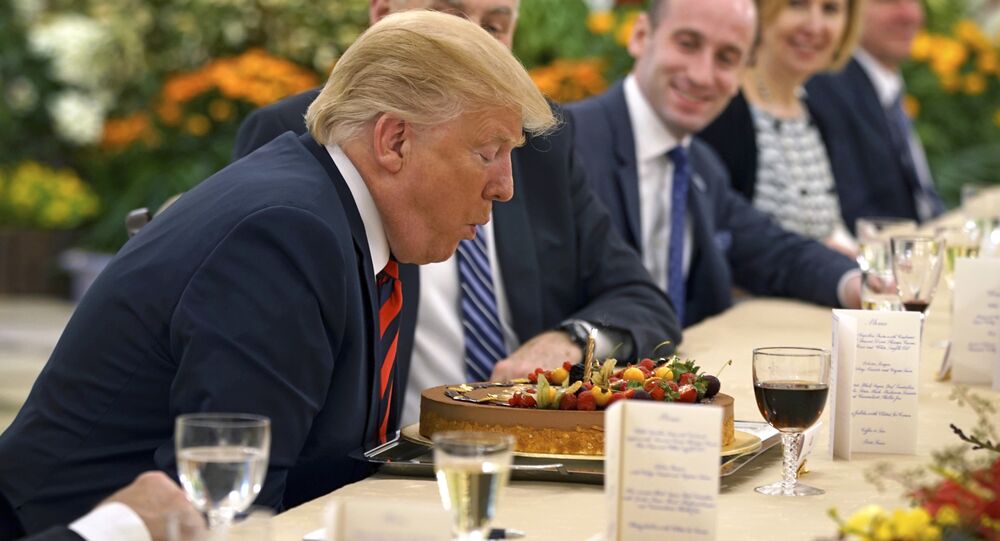 On the occasion of US President Donald Trump’s 72nd birthday on June 14, Sputnik has collected some of the most memorable (and sometimes awkward) moments that he experienced during the last year.

While the whole world was kept in suspense, closely watching the historic meeting between Donald Trump and North Korean leader Kim Jong-un, the US president seemed not to be nervous and even bantered, asking photographers to take a “good picture” of him and Kim so that they both looked “nice, handsome and thin.” And the North Korean leader’s facial expression, caught on camera, became the best part of the joke.

Kim's reaction to Donald Trump's joke is the best thing you will see all day today. #TrumpKimSummit pic.twitter.com/oLjVYIUApk

President Trump has repeatedly highlighted his administration’s patriotism and in a recent attempt to show it off, he appeared to forget the lyrics to the most patriotic song – “God Bless America” – at a White House event. The video, showing him mumbling through parts of the song before eventually giving up, has gone viral on social media, prompting an avalanche of reactions.

Trump unable to remember words to "God Bless America" at replacement event he commissioned to prove his patriotism: https://t.co/LrMPaCEnen pic.twitter.com/oCcWMX9g39

As POTUS rushed to his favorite Twitter to let his followers know that the first lady, Melania Trump, had returned to the White House from hospital after kidney surgery, he accidentally misspelled his wife’s name, which blew the social platform up. Even though he deleted the tweet and posted another one with corrections, some were quick to take a screenshot.

There we go. #melanie pic.twitter.com/LN4mf4tKJy

The viral audio clip recording truly became an apple of discord on social media: while many heard the voice say “Laurel,” others were convinced it sounded like “Yanny” due to lower and higher frequencies. But no one expected that there could be a third option: when the recording reached the White House, it caused a stir among staffers, which was recorded in a video.

The president also took part in the craze and mocked himself, declaring that all he heard was “covfefe” – an apparent allusion to his famous cryptic tweet.

As French President Emmanuel Macron visited his US counterpart in the White House, many started talking about their bromance, witnessing how well they bonded. Luckily, the epic moment when Trump proved that relations between the two were truly special was filmed by reporters: the US president took the chance to brush some dandruff off Macron’s jacket to make him look “perfect.”

If there's anything that strengthens relations between two countries, it's pointing out dandruff pic.twitter.com/KPxnrvtp5o

Social media went wild after POTUS tweeted a drawing of the purported suspect who allegedly warned the adult film star, Stormy Daniels, to keep silent about her 2006 affair with the president, who described the sketch as a “total con job,” once again bringing the scandal into the limelight.

A sketch years later about a nonexistent man. A total con job, playing the Fake News Media for Fools (but they know it)! https://t.co/9Is7mHBFda

The president’s bizarre manner of holding a glass using both hands has become a subject of trolling and memes, especially after he mocked US Senator Marco Rubio for pausing to reach for a bottle of water while keeping his eyes on the camera.

What is it with Trump and his two-handed chimpmunk-like style of drinking water? pic.twitter.com/0BvrYiDiRr

In January, the Hill reported that Trump had asked lawmakers, “Why are we having all these people from sh*thole countries come here?” while speaking about immigrants from Haiti and Africa.

While he denied the claims, international news agencies and social media networks were set afire: journalists had a hard time in translating the controversial phrase, and netizens struggled to prove to Trump that the countries in question were not that bad, posting loads of pictures.

Just in case someone was wondering what a #shithole looked like. #Haiti (And it’s from my last vacation not assignment). pic.twitter.com/VyulKamAqq

Trump’s statement on the recognition of Jerusalem as the capital of Israel became subject to mockery when he slurred some words as he spoke. The president seemed to face difficulties with  words that included the letter "s," pronouncing some of them as "sh," and NBS News quoted the president as saying at the end of the speech "God bless the United Shtesh."

"United Shirts"? Why did he say that? Does donald have dentures? I mean, it's okay if someone needs them, you know, like if they are really old or something. #DonaldDentures

While many users suggested that his dentures were falling out, The Tonight Show host Jimmy Fallon came up with a “commercial” for a product that Donald Trump could possibly use or advertise – “the official denture adhesive,” with the tagline, “Presi-dent: the best choicsh for your teeth.”

Trump's 1st Year In Office In Gaffes: From 'Covfefe' to 'Rocket Man' And Beyond

Twitter Explodes as "Swag Trudeau" in, "Nice Guy Trudeau" out