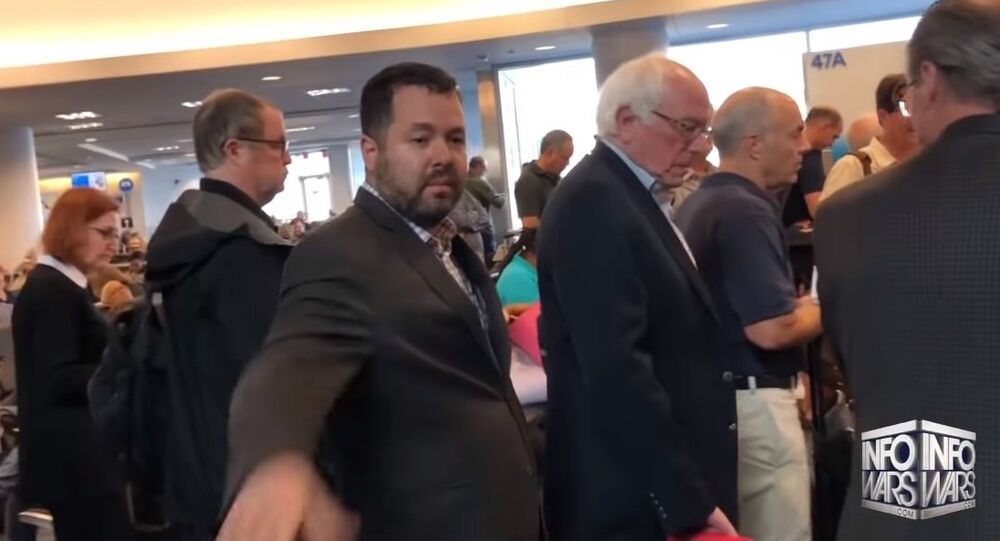 The InfoWars host accused the former Democratic presidential candidate of "running" from him as he attempted to ask him a racially charged question.

The incident took place earlier this week, with Jones, considered by many to be a "right-wing conspiracy theorist," catching the left-wing independent Vermont senator and his aides off-guard and trying to goad Sanders into a response about comments he made during the race.

"If it isn't old Bernie Sanders," Jones said, with one of the senator's aides almost immediately blocking him and saying "Dude, no, come on, not right now."

"Why'd you say white people didn't know what it was like before?" Jones asked, referring to a comment Sanders made during the primaries about White people not knowing what it's like to live in ghettos.

The king of #communism @BernieSanders literally ran from us🤣🤣 🇺🇸

Jones made several passes at Sanders and his aides, accusing them of flying first class, charging him with buying a $160,000 Audi, lightly pushing an aide and asking "Bernie, why are you running bro?" Sanders refused to respond.

In his video commentary after the incident, Jones called Sanders "the living embodiment of communist and socialist evil and failure" comparable to Mao Zedong, Joseph Stalin and Vladimir Lenin.

At the end of the video, a passerby confronts Jones, calling him a Sandy Hook shooting "denier" and asking him to "stop being an idiot for a second." The InfoWars host responds by accusing the man of being a supporter of Hillary Clinton and the destruction of Libya.

You're insane. He reacted as anyone should when they see you.

That doesn’t look like running to me. This is running 👇🏼 pic.twitter.com/klUXRjNcEf

All this proves is that:
1. You’re a right wing SJW for ambushing Sanders like that
2. You don’t know how to act like a journalist
3. You are #FakeNews

A few Jones supporters countered, echoing the host's suggestion that Sanders was "running."

😂😂😂😂😂😂 lol 🇺🇸🇺🇸🇺🇸🇺🇸🇺🇸🇺🇸🇺🇸
When a communist runs into a PATRIOT he runs lol