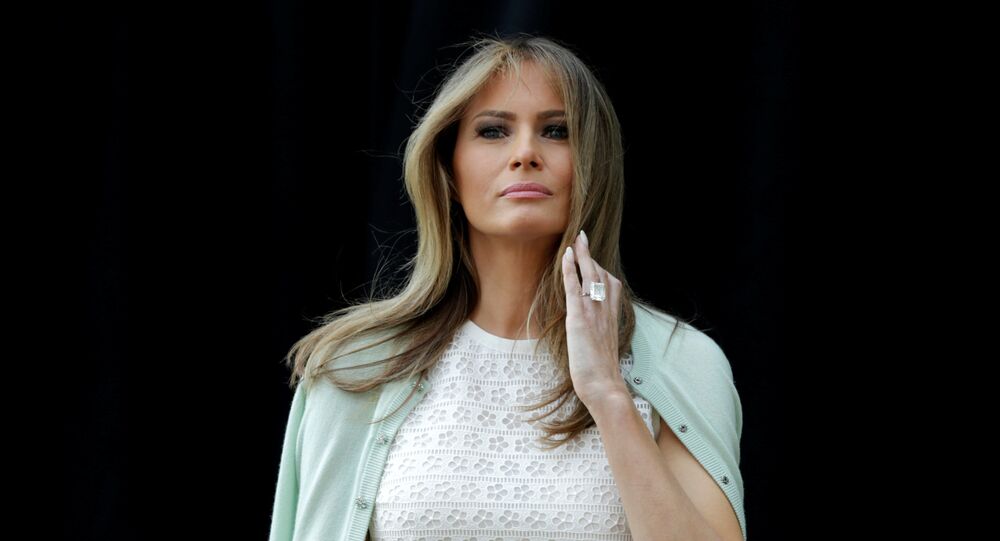 US President Donald Trump has taken to Twitter to denounce some of the most bizarre speculations and conspiracy theories circulating in media and social media platforms over his wife Melania’s three-week absence from the public eye.

Donald Trump has defended the first lady, who has been recovering from a kidney surgery, on his Twitter account, denouncing the “Fake News Media” that has been treating her “unfairly.”

The Fake News Media has been so unfair, and vicious, to my wife and our great First Lady, Melania. During her recovery from surgery they reported everything from near death, to facelift, to left the W.H. (and me) for N.Y. or Virginia, to abuse. All Fake, she is doing really well!

…Four reporters spotted Melania in the White House last week walking merrily along to a meeting. They never reported the sighting because it would hurt the sick narrative that she was living in a different part of the world, was really ill, or whatever. Fake News is really bad!

As Melania made her first public appearance at a Gold Star event in the White House, many social media users wondered if it was the real first lady that attended the ceremony, or her body double.

Was it Melania or her body double? How about letting @FLOTUS out in public?

"Melania's body double was strategically placed within reporters' eyesight —but not so close for them to figure it out- in order to dispel the rumors that she was kidnapped by isis. She was not kidnapped. She joined willingly
We miss you Melania pls come back:(" https://t.co/MpBTZwHoqC

Did Melania show up at the Gold Star Family event today? Or whatever it was? We’re there witnesses? Are we sure it wasn’t a body double? #WheresMelania #WitnessProtection #Flipped #WheresBarron #OnTheLam

When they release photos of her from 35 yards away with no zoom you can rest assured it’s a #Melania body double.

It's just a distant back of the head shot and she could even be wearing sunglasses, long sleeves, pants, etc. to hide the bruises. And no press allowed, so I'm still not convinced. I hope @SecretService is on her side. #WhereIsMelaniaTrump #whereisflotus

That's not Melania… That's a clone they created pic.twitter.com/DzmfTdGTbp

While many users claimed that there were no videos or pictures of Melania from the reception, which was closed to the media, a reporter from the Daily Caller, Jena Greene, whose father was killed in the Iraq war, attended the ceremony as a relative and tweeted a video of the Trumps entering the hall.

First public appearance by @FLOTUS in just under a month at the Gold Star Families reception to ihht. Good to see her doing well. pic.twitter.com/p6pCB4UPbi

Later, FLOTUS herself tweeted several snaps from the event:

Tonight @POTUS & I were honored to pay tribute to our fallen heroes. Thank you to the Gold Star families that joined us in celebration & remembrance. pic.twitter.com/6oSh1t88G7

Earlier at the Gold Star event, President Trump reportedly joked about the first lady staying out of the spotlight after the surgery, mimicking the media’s favorite question, “Where’s Melania?” He also mocked netizens’ speculations over the couple’s divorce, asking rhetorically “Did she leave him?” before pointing at his wife, sitting in the front row.

Three weeks ago, the White House announced that Melania had gone through an embolization procedure to treat a benign kidney condition, which went successfully and without any complications.