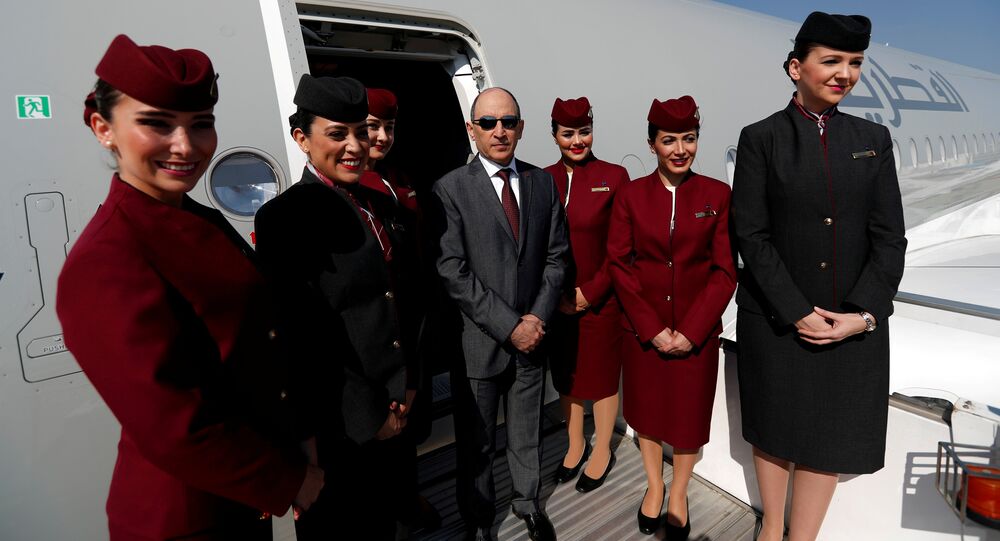 The embattled Qatari CEO has been recently elected as the chairman of the transnational association of the world's airways, responsible for issuing guidelines to over 200 airlines.

According to Bloomberg, Chief Executive of Qatar Airways Akbar Al Baker sparked a massive controversy moments after being elected as the new chairman of the International Air Transport Association (IATA).

Speaking at a press conference following his election, Al Baker was asked what could be done to improve the rates of female employment in the Middle Eastern airways.

Brushing off the suggestion that Qatar Airways lack gender diversity, Al Baker declared that a woman is not be capable of leading the airline, owing to the "challenging" nature of the job.

"Of course it has to be led by a man, because it is a very challenging position," the CEO stated.

The comments were met with astonished gasps and groans of disapproval from other attendees of the conference.

The audible gasp from the crowd as @qatarairways GCEO and @IATA Chairman Akbar Al Baker "jokes" only a man can be a CEO is amazing. Listen for yourself. @Qantas CEO Alan Joyce cutting him off was both good and bad, I suppose. #IATAAGM #iawa @WomenInAviation @WomenOfAviation pic.twitter.com/rrrFND3G5E

Al Baker's sexist remarks are even more problematic, given his new status as the chairman of IATA, whose responsibilities include the formulation of industry policy and standards for some 278 airlines.

© AP Photo / Hadi Mizban
UAE, Bahrain, Saudi Arabia Boycott of Qatar Airways Is 'Big Disadvantage' for Doha
This is not the first time that the Qatari CEO, who is also the non-executive director of Heathrow Airport Holdings, has caused a public outcry.

For instance, during an earlier spat between Qatar Airways and its chief competitor, Delta Air Lines, Al Baker's vowed to "hang on the wall" Delta's CEO Richard Anderson.

In fact, during the same IATA press conference, where he made his sexist remarks, the airline's executive promised to abstain from his controversial style, whilst chairing the organization.

Although Al Baker quickly backtracked on his comments, stating that it would be his pleasure to "have a female CEO candidate [he] could then develop to become CEO," the Twitter community did not take too kindly to the embattled airlines chief.

At @IATA AGM, @qatarairways Group CEO Akbar Al Baker responds to question on diversity and female representation in airline industry “Of course @qatarairways has to be led by a man, because it’s a very challenging position” Joke or not, resounding boos from the room #IATAAGM

In response to a question about gender equality in airline management, Akbar Al Baker says: 'Of course [Qatar Airways] has to be led by a man because [CEO] is a very challenging position.' As room gasps, Alan Joyce notes Al Baker's pledge to be uncontroversial lasted 10 minutes.

"Of course it has to be led by a man because it is a very challenging position,” Qatar Airways CEO Akbar al Baker on why a man and not a woman should hold the top airline job #IATAAGM — cue massive groans and boos

Qatar Airways boss, Akbar Al Baker, says, “Only men can run airlines.” Yeah, but can he lead a nation and the EU? pic.twitter.com/RRGq6yUJU7

Maybe #akbaralbaker of @qatarairways should look at #carolynmccall #chrisbrowne #harrietgreen as just a couple of great examples of leaders in air & travel. Shame on @IATA for appointing him chairman. https://t.co/AAkJktdkQX

Seems to me that Akbar Al Baker (CEO) is living in the past. Someone need to bring him up to speed in today's modern world and make him understand that our women today are by far more brilliant than most men that run company's like his!

You are a fucking knob #AkbarAlBaker typical dinosaur brain! I hope you are replaced by a woman & she knocks 10 kinds out of the shite job you’ve done! https://t.co/mGF7TN0adk

"Set your sights elsewhere, women. Qatar Airways Chief Executive Officer Akbar Al Baker says only a man could rise to the challenges of his job." I am not shocked at all, since that statement comes from that region where woman do not count as much as men. https://t.co/tOWm7sEED6