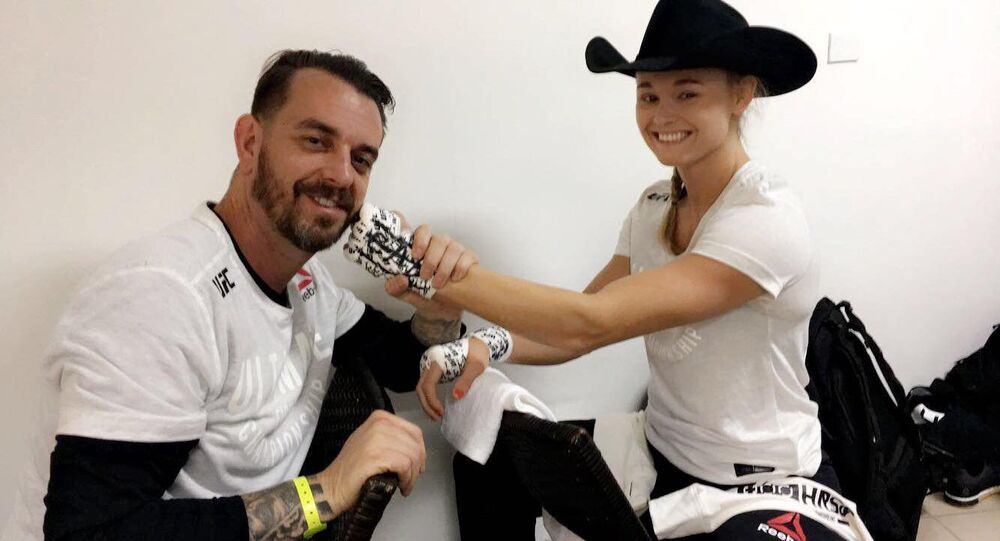 As UFC flyweight Andrea Lee tweeted a series of pictures from a family day at a lake on Saturday, some watchful eyes on social media noticed a swastika tattoo on her husband’s left arm.

Having realized that the ink might be seen, Lee cropped the image, leaving it on her social media accounts without a view of her husband’s, Donny Aaron, arm but it was too late – some managed to take screenshots, saving the initial snap.

Still had a great day at the lake with my fam and certainly enjoyed the jet skis. ✌🏻😛😝 ❤️ pic.twitter.com/s5FuwYc2Y5

Andrea ‘KGB’ Lee’s husband has a swastika tattooed on his forearm. pic.twitter.com/NTntH0paRr

Addressing the offensive tattoo, Lee wrote in a tweet – which has since been removed – that Aaron got it when he was in prison, adding that neither of them is racist.

It's just a Nazi tattoo. You "sensitive ass mofos." pic.twitter.com/RbQ6A6BHi6

Aaron, who appears to be his wife’s coach, also tweeted that he would get it covered or removed if possible:

Thank you. That’s what I’ve tried to do is reinvent my life. My scars bring this up from time to time but my tattoos don’t define who I am ppl say get it covered or removed. Trust me if this were possible I would. However it would end up looking even more red neck than it does. https://t.co/o02zuhibQJ

Her tweet has spurred massive backlash on the social media platform, with many saying that Aaron could have covered the tattoo if he wanted to:

It’s so small it would cost almost nothing to have it covered or blacked out. No excuse, if you aren’t a nazi get rid of the tattoo.

If you really regret a tattoo you can have it covered up, change it to something else or have it removed. He chose option D: keep rocking it

Disgusting! I would distance myself immediately from anyone who hasn’t removed the nazi symbols for 20 yrs and can look at themselves in the mirror. Hope but doubt @ufc will do anything about it.

At the same time, there were those who said that Aaron deserves a second chance:

Donny's past wasn't a secret. It wasn't shouted about, but it wasn't hidden either. Everyone deserves a chance to try and change and rebuild their life after doing their time. That's how the system is meant to work. (2/2)

Upon realizing that her initial reaction may have been deemed offensive, Lee published a full apology…

Please read my full apology, this is to everyone who was upset or offended by me and my initial response. I sincerely apologize, it wasn’t thought out when I sent it, I deleted it immediately after I sent it when I was more rational and clear minded. 🙏 forgive me pic.twitter.com/9td65xNAmo

…as well as Aaron, who tried to convey the message to his followers that a “20-year-old-mistake” doesn’t define him and that he’s a different man now than he was in his twenties:

Many, however, continued denouncing Lee and her husband, saying that actions speak louder than words:

How can you say your a changed person from your 20s when you can’t even pay what a few $100 to get those tattoos taken off. C’mon actions speak louder than words.

I agree. This is ridiculous. It’s regret now?? After 20 years and the internet caught it, it’s now a regret. What about when he sat there and got it? No regrets there. Him and his homies high fived when it was finished.

You're only doing this to save face you dont care about anyone, you were caught out giving your true feelings and now you're worried about losing your sponsors and being cut. Hope you get cut!

Your apology is great but in reality something so offensive should be covered up. People cover up Ex Girlfriend & Boyfriend names, so it would be wise to do so. It is his body but the history behind that symbol is beyond terrible.

Some accepted Aaron’s explanation, saying that everyone has a past:

I believe you are a good guy and your wife would never allow herself to be with a racist. Your explanation makes sense and as a sinful human I am always learning, maturing, growing, and improving. I wish you and Andrea continued success and happiness in your future!! #TeamKGB

Everyone has a past. It's a shame today's society is so quick to point a finger without knowing details. I am a fan of your work & thst will not change. Live free!

I know him as my Brother, not a racist. In all these years I’ve never seen or heard 1 single racist thing come from him or anyone I have met through him. Not one.
Like all of us, his life has been a journey. He’s a great man, father & role model in all of my experiences with him.

After reading this statement I went from hating you to respecting you. This was a touching statement you made and I wish you the best. I'm no saint myself and everyone deserves a second chance. Best of luck to the both of you!

Andrea Lee is the No. 12 ranked worldwide female flyweight contender with a 9-2 record. In her last fight at a UFC Fight Night on May 19, she won a unanimous points decision over Veronica Macedo.