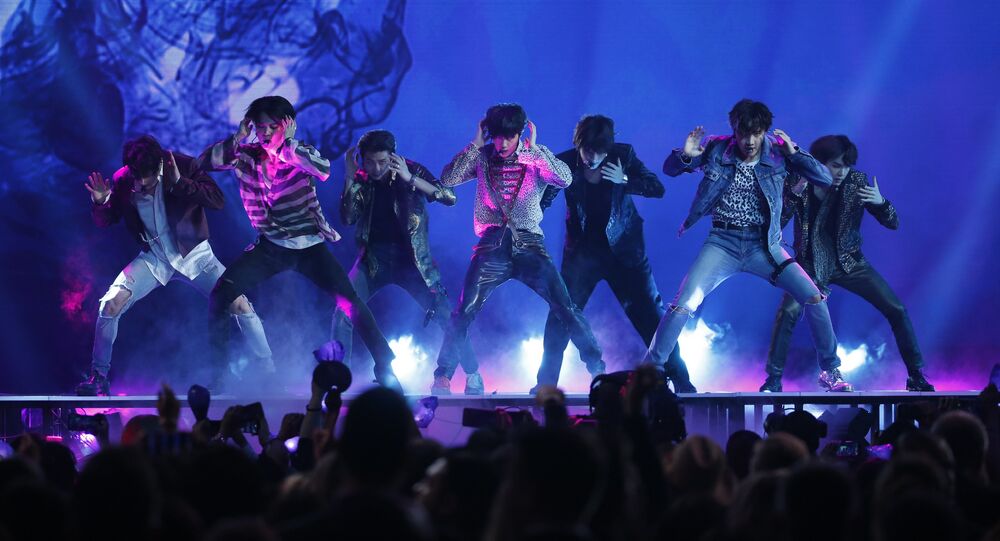 Popular K-pop boy band BTS has hit a new high as the rock version of its hit “Fake Love” was released on June 1.

The popular K-pop boy band BTS has surprised their fans with an unexpected gift: a rock version of their latest lead single “Fake Love” was published with an extended video on YouTube. An unexpected scene in the video, which shows six guys wearing black hooded cape with their faces covered with Venetian masks while Jungkook, one of the band’s members, walks over to them, after which they all disappear, has been a topic of discussion.

The original version of the video is almost a minute shorter and does not depict that scene.

The unexpected scene left “the Army” (the official name of the group’s fandom) puzzled.

When you have to do a music video but you have a cult meeting at 9 pic.twitter.com/ae6VnDCMZa

Here's another thought what if what fell on them was like a trap box so their inside it instead of actually being crushed?? This is a less sinister alternative but they get trapped in again just like how their still trapped in their fears. pic.twitter.com/EsKRowiUwu

My head is going to explode!!

okay so this just came into my mind. just like how the length of "singularity" had a hidden meaning, i thought maybe even fake love's length might've been a clue so i googled the duration of both mvs and this is like talking about the concept of being freed?@BTS_twt #FAKE_LOVE pic.twitter.com/WEuPKlkhxH

I love it!!! But my brain hurts! I can’t with the theories in my head pic.twitter.com/FbPl6Reddn

Most of their fans were incredibly happy with the new rock version of the song:

I was talking a walk 3 hours before the video dropped thinking "I wish BTS would do a more guitar heavy song" and BOOM. BIGHIT'S ARMY-STALKIBG LVL IS GETTING CREEPY BUT THANK YOU ALL THE SAME @BTS_twt

Meanwhile, possible explanations of the video’s plot have appeared on the web:

BTS (also known as the Bangtan Boys) is the one of the most popular and bestselling boy bands in the world. On May 20 the sensational group received the Top Social Artist Award at the 2018 Billboard Music Award. Moreover, the guys became the first South Korean artists to not only top the Billboard Social 50 chart, but also perform at the Billboard Music Award ceremony. If that’s not enough, here are some more facts:

Speaking about sales, the band’s latest album “Love Yourself: Tear” became the first K-pop album ever to top the Billboard 200 album chart. The official music video for the lead single from their third studio album added another achievement for BTS as the MV reached 41 million views in 24 hours after being published on May 18. It’s currently been viewed around 130 million times.