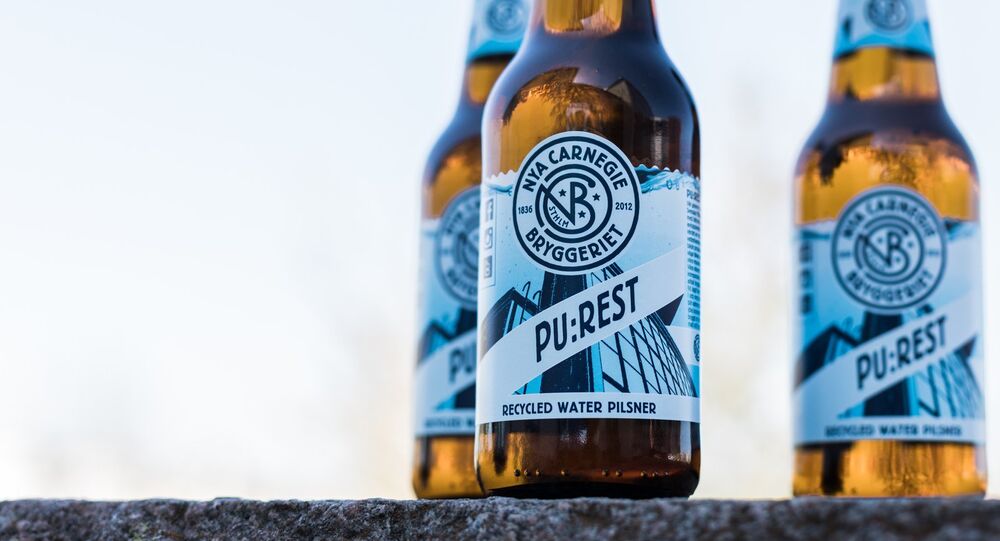 "We couldn't resist the challenge," a brewery representative said when explaining their choice of ingredients. By the company's own admission, one of the goals of the new beverage is to raise awareness of water shortages across the globe.

Pu:rest, Sweden's first beer brewed from purified sewage water, has made its debut. The revolutionary drink has been concocted by Stockholm-based brewery Nya Carnegiebryggeriet in collaboration with the Swedish Environment Institute (IVL).

The unorthodox take on one of the world's favorite beverages is based on the hope of raising awareness about sustainable solutions to the most burning environmental problems. In a world threatened with water shortages, technologies for purifying wastewater to the level of normal tap water are imperative.

The water used in the beer comes from Hammarby Sjöstadsverk, IVL's water cleansing venue, where it has been treated with a long chain of purification measures. After rigorous quality tests, the water was delivered to the brewery, where it saw the light of the day as a pilsner after four weeks.

Chris Thurgeson of Nya Carnegiebryggeriet said the company couldn't resist the challenge when faced with a proposal from IVL. According to Thurgeson, it only felt natural to brew Pu:rest, which the company described as "organic and crystal clear pilsner" with a "pure and nude" style.

"As an environmentally conscious actor in the food industry, we share the view that both producers and consumers must dare to think differently to carefully manage Earth's resources," Thurgeson said in a press-release.

During the presentation, IVL researchers presented the purification technique and provided an overview of the water shortage problem in the global perspective. According to the creators of the "sewage beer" the idea is to shed prejudice, as many may be still skeptical over drinking purified wastewater, despite a technique in place to render this into a perfectly safe experience.

According to Thurgeson, the company has already implements a number of climate-friendly solutions. For instance, malt residues are converted into biogas, the brewery exclusively uses "green" electricity, and all food waste is carefully sorted.

Starting from July, Pu:rest will be available in limited edition in Sweden's government-owned chain of liquor stores Systembolaget. Additionally, the "sewage beer" will be featured in an array of pubs and at selected festivals, such as A Taste of Stockholm.

The advent of Pu:rest has triggered animated reactions among Swedish public, prompting witty reactions. While several media used the epithet "poop beer," users on the brewery's Facebook page claimed the beer to be "s*it-good" (which in Swedish is a bona fide expression of approval).