Social media users did not mince words when blasting the US president’s daughter for tweeting an image of herself and her two-year-old son amid worrisome reports about kids being taken from their parents by US border agents.

As Ivanka Trump shared a touching picture on Twitter, thousands of people drew a connection between her post and her father’s policies of forced separation of families at the US border.

Many mothers couldn’t keep silent about widespread news reports regarding the situation on the border:

You're a mother of 3. So am I.
Imagine someone in an ICE uniform takes away your precious baby, and you never get to see him or her ever again.
This is what's going on, thanks to your Dad's policy. DO SOMETHING.#WhereAreTheChildren #PrisonBusForBabies pic.twitter.com/doP2klUl22

Ivanka I do appreciate the fact that you have decided to own what you are. No more pretending to be a decent person. I’m a Mom of two children and I want you to understand that we won’t forget the atrocities you’ve enabled your father to commit. Justice will eventually prevail.

This must cut to the heart of those parents who cry themselves to sleep not knowing where their children are. Heart of stone ☹️

Other users considered the tweet “tone deaf,” saying Ivanka was “complicit” in supporting the president’s policies and promoted the hashtag #WhereAreTheChildren to draw attention to the issue:

This is so unbelievably tone deaf, given that public outrage is growing over young kids being forcibly ripped from the arms of their parents at the border — a barbaric policy that Ivanka Trump is complicit in supporting. https://t.co/Hy1FVjLoZV

If there were a Tone-Deaf Olympics, you would be its Michael Phelps.

Hundreds of children have been forcibly removed from their parents, kept in jail cells, abused by ICE guards, & lost in the system

But go ahead, tone deaf Barbie. Enjoy your snuggles while your deafening silence to your father’s inhumane policies reveals you#WhereAreThChildren

Isn't it the just the best to snuggle your little one — knowing exactly where they are, safe in your arms? It's the best. The BEST. Right, Ivanka? Right? https://t.co/X79r8aWInc

1500 misplaced children, taken from their parents, kept in kennels, given to known child traffickers. You and those you associate with are the very worst. You are complicit. Your apathy will never be forgiven or forgotten. #WeAreTheChildren

Given the uncertain fate and whereabouts of 1,475 missing migrant children, and your father’s policy to separate frightened children from their families, the timing of your decision to post this photo is loudly tone-deaf. #WhereAreTheChildren Show some compassion!

Some, however, thought that the image wasn't tone deaf, but a deliberate response to the outrage over the missing children:

I actually don’t think it’s tone deaf at all. I think it was a calculated intentional response to the outrage regarding the missing children. They do not care and they are unabashedly proud of how horrible they are.

There’s nothing tone deaf about Ivanka or this picture. She posted this deliberately, in a “own the libs by mocking the loss of 1500 kids (who we don’t care about b/c they’re brown)” kind of way.

IT IS NOT TONE DEAF — SHE IS RUBBING SALT IN THE WOUND —.@IvankaTrump supports the torture/cruelty/barbarism of her father's administration and is showing that support in a way designed to show she & her family will always be above the law & untouchable

On Sunday, numerous media outlets reported that the United States had lost track of nearly 1,500 immigrant children that it placed with sponsors – the number was disclosed by Steven Wagner, a senior official with the Department of Health and Human Services, to a Senate Homeland Security subcommittee last month. Social media users are concerned with the fact that the missing kids may end up with human traffickers. 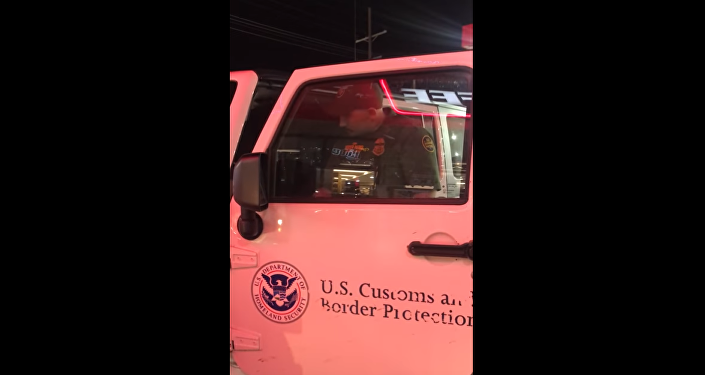 YouTube Screenshot/ViralHog
Spanish Inquisition: Border Patrol Agent Stops US Citizens Because They Weren’t Speaking English (VIDEO)
According to a New York Times report, “more than 700 children have been taken from adults claiming to be their parents since October, including more than 100 children under the age of four.”

Last month, US Attorney General Jeff Sessions announced a “zero-tolerance” policy for those entering the United States after a spike in illegal border crossings. This followed President Donald Trump’s decision to deploy between 2,000 and 4,000 members of the National Guard to the US border with Mexico in order to support Border Patrol agents until a wall is built between the two countries.