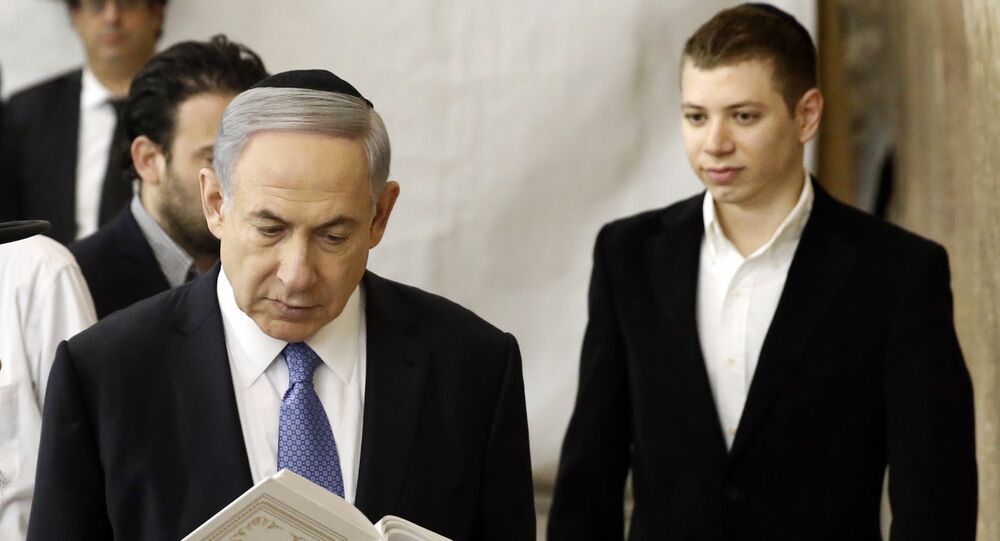 Yair Netanyahu, the 26-year-old former IDF media relations officer who gained global notoriety last week by posting a picture captioned "F**k Turkey" in the style of the Turkish flag, may have risen to some measure of international recognition for the first time. But inside Israel, he's known for a series of scandals going back at least five years.

Yair's message to the Turks amid his father's acrimonious back-and-forth exchange with President Recep Tayyip Erdogan last week led to an instant backlash, prompting Yair to delete the post and his Instagram account.

The comment also prompted members of Prime Minister Netanyahu's inner circle, no doubt used to defending him from his son's controversial behavior, to declare that Yair was a private citizen, and so was his Instagram account.

But in Israel, the loudest scandal involving Yair has nothing to do with international relations, but instead revolves around an audio recording released in January in which the young man brags about his father's efforts to "arrange" a major gas deal for gas tycoon Kobi Maimon outside a strip club.

© AP Photo / Gali Tibbon/Pool
Netanyahu: ‘I Agree With Hamas,’ Gaza Protest Wasn’t ‘Peaceful’ (VIDEO)
The recording, dating back to 2015, features an agitated Yair asking Maimon's son to spot him 400 shekels (about $110) for the club, and talking about where to find the best hookers. "Speaking of prostitutes, what's open at this hour?" he asked.

The scandal surrounding the tape, soon dubbed "Strippergate" by the media, was only heightened amid the knowledge that Netanyahu and his friends went to the club in a government car, and were accompanied by bodyguards. One of Yair's friends even joked that a security guard overhearing the talk might have to be killed if he left his job to prevent the conversation from leaking.

Everything you need to know about "Strippergate," Yair Netanyahu's latest scandal https://t.co/onxuJnH0zr

Yair eventually apologized, claiming his remarks were a joke, and that he was not aware of any business relationship between Maimon and his father and was just talking nonsense. Benjamin Netanyahu, already reeling from corruption allegations, also went into damage control mode, claiming that he had only met Maimon on one occasion and that he had no idea that Yair was friends with the businessman's son.

Six months earlier, in August 2017, Yair got in another, admittedly less glitzy scandal, after a neighbor complained to him about his refusal to pick up after Netanyahu family dog Kaia. Netanyahu's response: to give the woman the finger.

The scandal prompted NGO Molad to publish a scathing satirical attack on Yair titled "Five Things You Didn't Know About Crown Prince Yair Netanyahu," which revealed that the young man still lives at home with his parents, cruises the streets of Jerusalem with a driver and bodyguard paid for by the state, holds no official job in the government, has sympathies for the ultra-right, and hates Arabs.

Yair remained unrepentant, posting an angry Facebook message in which he declared that he would "not relate to all of the lies and slander," and that he had another message "for all the members of the Israel Destruction Fund and their metastases," accompanied by an emoji giving the finger and an emoji of a smiling pile of poop.

© AP Photo / Emrah Gurel
Erdogan Compares Israeli Actions Against Palestinians in Gaza to Nazi Persecution of Jews
Urging Molad to look into someone else's dirty laundry for a change, Yair hinted at an alleged homosexual relationship between former Prime Minister Ehud Olmert's son Ariel and a Palestinian, suggesting this might have "significance for the security of the country."

Ariel Olmert, a married man, said Yair's remarks stunk of "racism and homophobia," adding that unlike Netanyahu, he did not spend his time hobnobbing with billionaires, didn't have drivers and bodyguards, cleaned up after his own dog and earned his own living.

From Annoying Religious Leaders to Memes Approved by the KKK

In addition to his political scandals, Yair also seems to have made a habit of annoying Israeli religious figures, from dating a non-Jewish girl from Norway in 2014 (unacceptable under Jewish religious law), to his posing with a Santa hat and a Christmas tree in 2012. The latter incident forced the office of the prime minister to assure Israelis that Netanyahu was simply visiting Christian Zionists for Christmas.

Critics complained that the post reeked of anti-Semitism, with such memes normally posted by people who believe in a worldwide Jewish conspiracy. Former Prime Minister Ehud Barak, among the figures represented in the picture, suggested that Israelis should collect the money for Yair to receive access to "a psychiatrist, not a bodyguard and a chauffer."

While it garnered criticism in Israel, the post received the approval of the American ultra-right, including former Ku Klux Klan grand wizard David Duke.

Scandalous or not, amid continued instability in the Middle East, President Trump's withdrawal from the Iran nuclear deal, Israel's strikes against Syria, and the US moving its embassy from Tel Aviv to Jerusalem, many Israelis seem to be paying little heed to Yair Netanyahu's faux-pas. Earlier this month, two polls showed that Prime Minister Netanyahu's Likud Party would see a jump of between 5 and 12 seats up from their current 30 if elections were held today.