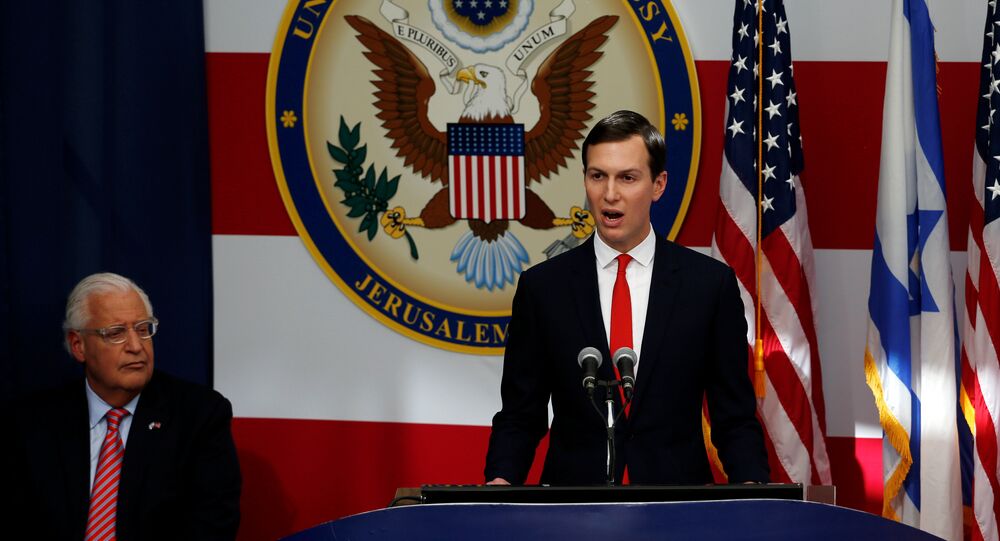 While Jared Kushner, Donald Trump’s son-in-law and a White House policy adviser, took the floor at the US Embassy opening ceremony in Jerusalem, Twitter most naturally turned ablaze, with many resorting to increasingly demonstrated skepticism and even outrage over the Kushner family's involvement in yet another Middle Eastern issue.

One user emotionally remarked "Why is HE there again?" while others engaged in a debate over why Kushner nearly called Benjamin Netanyahu’s spouse by her first name, despite the event being an official ceremony:

Why is HE there again? How much money are Kushners making on the move of the Embassy?

Ignorant, mannerless louts, all of them.

Jared Kushner just thanked Mr Prime minister Netanyahu and " Sarah".
a slip up… but it says a lot.
You do not call the spouse of a head of state by her first name at an official event.

Most netizens rushed to speculate on the amount of money the Trump adviser’s family must have made while lobbying for the embassy move, with one being most explicit calling the story "nepotism on steroids." Another one went as far as labelled him an "unqualified stooge" with a "squeaky voice" who is a "disgrace" and a laughing stock for the American nation.

Jared Kushner, USA’s prime example of nepotism! Speaking for trump in Israel in the most hypocritical way! He says he’s the grandson of holucaust survivors but he praises trump who idolizes Hitler, the murderer of millions of Jews!

Jared Kushner is a unqualified stooge who has been able to use the White House as an ATM thanks to nepotism. His squeaky voice representing the US on a large international stage in Jerusalem is an absolute disgrace.

Israel has now killed at least 46 Palestinians, and injured 1700+ today alone in Gaza because Trumped moved the embassy to Jerusalem.

6 of the dead are children….

Why is Jared Kushner representing your country? Why is the daughter-wife? Nepotism on steroids.

Jared Kushner speaking, in Jerusalem, to an audience of MAGA hat wearing Cultists, whilst under investigation and having lower security clearance than the WH Stenographer. And then daughter Ivanka, NOT our S of S unveiling. Nepotism LIVES!!

How disrespectful Jared was to the ambassador by saying he was “doing a great job”, condescending little sh*t. He’s your elder n you should be more gracious toward him, no matter what u think about him personally.

Others indulged in a bit of sarcasm, pointing to the fact that Kushner is perhaps no one, or rather should be no one in the administration since he cannot maintain a security clearance:

Why is Jared Kushner making this presentation? Why are people not concerned with nepotism, lack of qualifications, and lack of security clearance for our rep. in a vitally important region? I feel like I’m stuck in a nightmare, purgatory, or a painfully realistic Twilight Zone.

I'm just… I just don't get it. There's a process to a nomination, a commission, interviews, be it as a diplomat or as a cabinet member. I'm still struggling to understand what's Ivankas /Kushner role + HOW come they have security clearances to pull this!?!?

Other ceremony watchers most expectedly referred to the ongoing Palestinian crisis, saying the whole story resembles a feast at a time of plague.

This is irresponsible of Trump letting his Son in law handle middle east peace. I don't see any peace going on. This is so dangerous for the whole world. Why isn't our government taking this more seriously?

Watching this “celebration”while Ignoring Palestinians is nauseating.
And Jarred is just a creep.

Bibi’s corruption investigation was referred to as well:

Just wonder if 'Kushy' connection will be looked at by those investigating Bibi in Israel, what's one extra corruption charge when you've already got 4…

​Earlier in March, in the framework of the Mueller investigation, FBI officials reportedly scrutinized a series of meetings, which allegedly occurred between White House aide Jared Kushner, who had been appointed to be Trump's senior adviser on Middle East policies, and potential investors in his family's vast real-estate business.

© REUTERS / Joshua Roberts/File
Who Ya Gonna Call? Kushner Reportedly Sought Bolton's Advice Before McMaster's Ouster
Among the business contacts several unnamed sources cited officials in Turkey and Qatar, as well as Chinese Ambassador to the United States, Cui Tiankai, and Russian banker Sergey Gorkov, MSNBC reported. Kushner's attorney and his spokesman, however, refuted the statements, saying "Mr. Kushner's role in the campaign and transition was to be a point person for completely appropriate contacts from foreign officials and he did not mix his or his former company's business in those contacts."

Separately, contemplations are on the rise over Kusnher's deepening business ties with Israel. For instance, in January,  reports surfaced that Jared Kushner had received an investment of roughly $30 million from Menora Mivtachim, one of Israel's largest insurers, back in spring 2017, just ahead of the Trump-Kushner family's official visit to Jerusalem and shortly after Kushner took office as Trump's aide.

In the meantime, Kushner Companies LLC is reported to be seeking over $1 billion worth of loans to pay for debt on the family's properties in New York and Chicago.

Dems Urge Kushner to Resign Over US Security Concerns