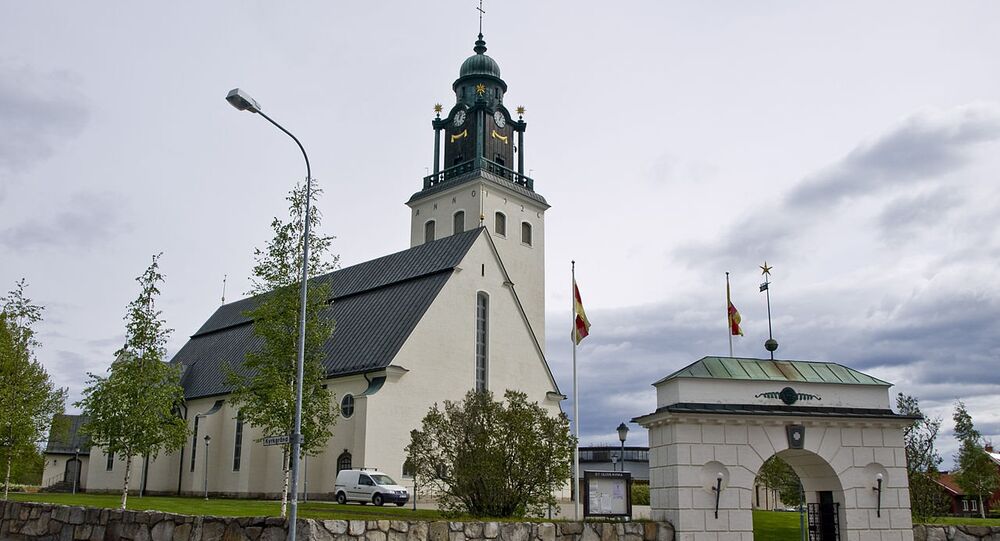 The word "jihad" appeared on the façade of St. Olov's church in the town of Skellefteå in northern Sweden, the news outlet Nyheter Idag reported.

According to P-O Sjödin, communicator at the Skellefteå pastorate, the vandalism must have taken place on Sunday evening or during the night to Monday. The inscription included the word "jihad" in capital letters, followed by another symbol that church officials failed to recognize. P-O Sjödin ventured that it might be a type of signature.

Jihad is an Arabic word meaning "striving," but also denotes the desire for holy war in many Islamic contexts. The Skellefteå pastorate refrained from any conclusions.

"I do not interpret the message in any way, but I hope and believe it's a common doodle. Similar scrawls have appeared on a garage in Anderstorp. We hope and believe that this is a prank," P-O Sjödin told Nyheter Idag, calling it deplorable that church property cannot be left in peace.

The scribbling was reported to the local police and removed on Wednesday. Incidentally, the same church was vandalized about six months ago, when stickers and barricade tape appeared at the entrance.

Swedish national broadcaster SVT initially published a photograph of the vandalized church, but chose to remove it, stating the image was "too sensitive" to be shown. Meanwhile, Swedish social media users started began to compete in sarcasm over the media coverage of the incident.

​"Sure, you know how SVT are at pains not to show off every swastika they manage to find," a user wrote, mocking the broadcaster's perceived left-wing bias.

​Another Swede ventured wryly that the alleged culprit most likely was a local man who merely intended to write "Ji had int tid" ("I had no time", in heavy local dialect).

"Imagine somebody painting a swastika over a mosque. Would we have the same 'consequence-neutral' coverage?" yet another user argued.

"Now I've had enough. Islamic prayer calls, jihad graffiti and mobbed children who eat pork or wear skirts. Next time SD will definitely get my vote," another user wrote, voicing his sympathy for the anti-immigrant Sweden Democrats party in the run-up to the upcoming general election.

​Skellefteå is a major industrial and mining town in Västerbotten County in Northern Sweden. It has about 35,000 inhabitants and is one of the largest in the area. It is often referred to as "Goldtown" due to its mining industry. Saint Olav's Church is Skellefteå's city church. It was built in the 1920s in classicist style.