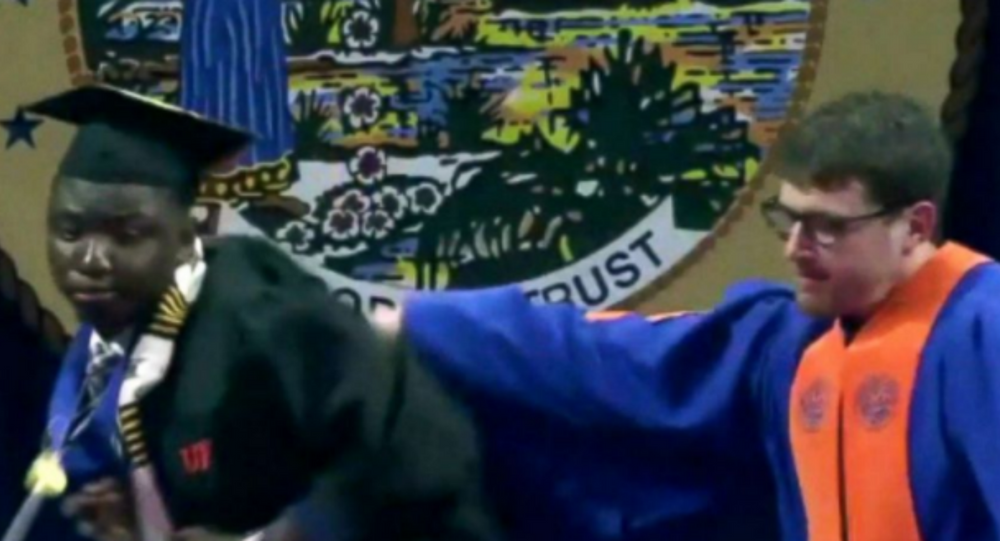 The University of Florida admitted Sunday that its graduation ceremony usher was “inappropriately aggressive” in yanking away graduates who strolled or danced across the stage during the university’s spring commencement ceremony Saturday.

"In general, I don't think I've ever been handled in that manner, not even by my parents," Oliver Telusma, one of the students who was shoved off stage, told ABC News' "Good Morning America" Monday. "It's kind of embarrassing, kind of degrading."

Student Nafeesah Attah also told Good Morning America that the dances were gestures of joy that have significance to the graduates' fraternities and sororities, adding that the white usher's yanking "was not arbitrary."

"It was definitely contingent on your race… other white students who were dancing were not perceived as a threat," Attah said.

"I kind of planned what I wanted to do on stage to celebrate my story, all of my hard work I'd done at the University of Florida. I tried to do one of my stroll moves, but I was instantly, like, blocked by one of the officials on stage and they aggressively pushed me off the stage after that. So I was definitely disappointed they took that moment from me because I can only get my bachelor's once," Attah told ABC.

​A video of the incident shared online has further spurred concerns that the usher targeted black students.

University of Florida graduate Christopher Garcia-Wilde told ABC News that the usher appeared to shove black students who were strolling, a "cultural tradition in historically black fraternities and sororities." Other students were not rushed on or off the stage in such a hostile manner.

"It's a tradition to stroll at graduation if you choose to, and people have been doing this for years," Garcia-Wilde told the Gainesville Sun on Sunday. "I was actually too afraid [to stroll] because I saw him shove other people."

"But my two friends who graduated with me really wanted to do it, so they tried. They both were pushed and one of them got an entire bear hug," he added.

In another university commencement ceremony Sunday, University of Florida President Kent Fuchs admitted that the school had been "inappropriately aggressive."

"I want to personally apologize for us doing that on behalf of myself and also the University of Florida," Fuchs said during his speech.

On Sunday, May 6, he also tweeted, "During one of this weekend's commencement ceremonies, we were inappropriately aggressive in rushing students across the stage. I personally apologize and am reaching out to the students involved. The practice has been halted for all future ceremonies and will work to make sure all graduating students know we are proud of their achievements and celebrate with them their graduation."

Person With Gun at Northwestern University in Illinois, Reports of Shots Fired