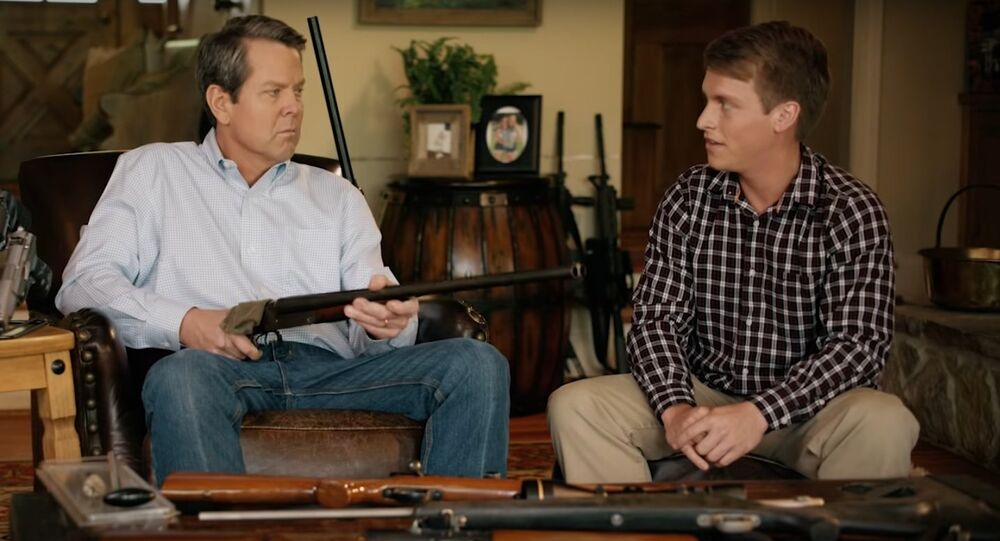 The secretary of state of Georgia, currently running for the office of governor, has released a political ad that was supposed to familiarize the audience with his electoral program, but it seems it will be remembered for something quite different.

Twitter has once again been set alight by a "state-of-the-art" political ad, promoting Georgia gubernatorial candidate Brian Kemp. What was supposed to be an appeal to conservatives came across as odd considering recent tragic events in the US.

In a video, Brian Kemp shows a teen, named Jake, who is then required to state the two main principles needed to date Kemp's daughter — namely "respect" and "a healthy appreciation for the 2nd Amendment." When Jake names both correctly, the candidate raises his double-barreled shotgun in his direction and says they are going "to get along just fine."

I'm a conservative businessman with a 4-Point Plan to put hardworking Georgians first. I'm also the proud father of 3 teenage girls. Here's the thing: If you want to date one of my daughters, you better have respect for women & a healthy appreciation for the 2nd Amendment. #gapol pic.twitter.com/dQvvfk06Rh

Judging by Jake's face, he doesn't seem agree on 100%, but who would argue with a man holding a gun in a room full of weapons, including AR-15-style ones.

Twitterians were not so modest in expressing their opinions, with many slamming the candidate for disrespecting safety rules:

Brian Kemp is currently running for the position of Governor of Georgia. Kemp, in his last campaign ad, INTENTIONALLY aimed a shotgun at a teenage boy at point blank range.

How many of the SIMPLE RULES FOR FIREARMS… https://t.co/xUGR9iniwZ

In a campaign ad, if you have to point a shotgun at a teenager to show how strong and manly you are — you are neither. Brian Kemp is an embarrassment to Georgia. https://t.co/Nyx8pjpvk9

Seriously, I was taught to treat every gun as if it were loaded. I guess that doesn't count if you're running for Governor?

There isn’t much to say about that Brian Kemp ad playing back home in Georgia. It’s insane. It’s insane even if you’re a Republican who likes guns.

Brian Kemp Republican points a shotgun at a teen in campaign ad to support 2nd amendment! Offensive and outrageous… not freedom of speech…for me this crosses a moral boundary!! Sick.

Vote for Me or Else: US Lawmaker Draws Loaded Gun at Speech