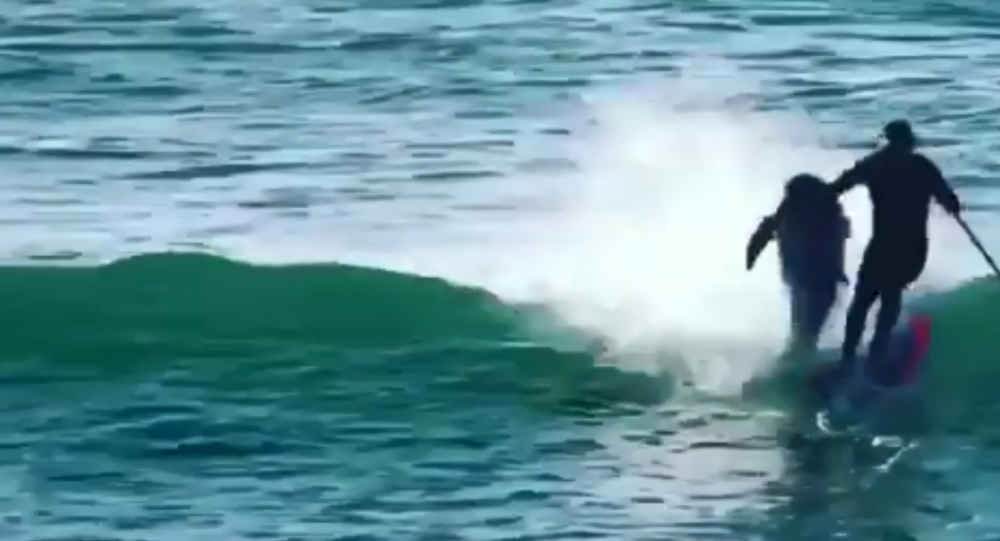 Footage of a stand-up paddleboarder being tackled by a speeding dolphin off the coast of Gracetown, Western Australia, went viral on social media this weekend.

Andrew Hill told Australian television news service Seven News that he was surfing when a group of dolphins rode an incoming wave right toward him.

"Eight or nine of them decided to catch that wave and surf straight to me," he said.

One dolphin, however, managed to knock him right off the board.

"Hats off to him, he collected me really well," Hill said, adding that seeing dolphins while surfing is a good sign but he'd "prefer them to stay a little bit further away than they did yesterday."

"He [Englert] was actually very happy because I don't think he thought that anyone was actually going to believe his story — so now he's got the proof," Englert said.

The incident occured in the same area where two surfers were attacked by sharks this month, prompting the World Surf League (WSL) to call off the Margaret River Pro competition, held about 170 miles south of Perth, Western Australia's capital city.

"The WSL puts the highest premium on safety. This cannot be just talk and it cannot be compromised. Surfing is a sport that carries various forms of risk and is unique in that wild animals inhabit our performance environment. Sharks are an occasional reality of WSL competitions and of surfing in general… However, current circumstances are very unusual and troubling and we have decided that the elevated risk during this season's Margaret River Pro has crossed the threshold for what is acceptable," WSL spokesperson Sophie Goldschmidt said in an April 17 statement, Business Insider reported.