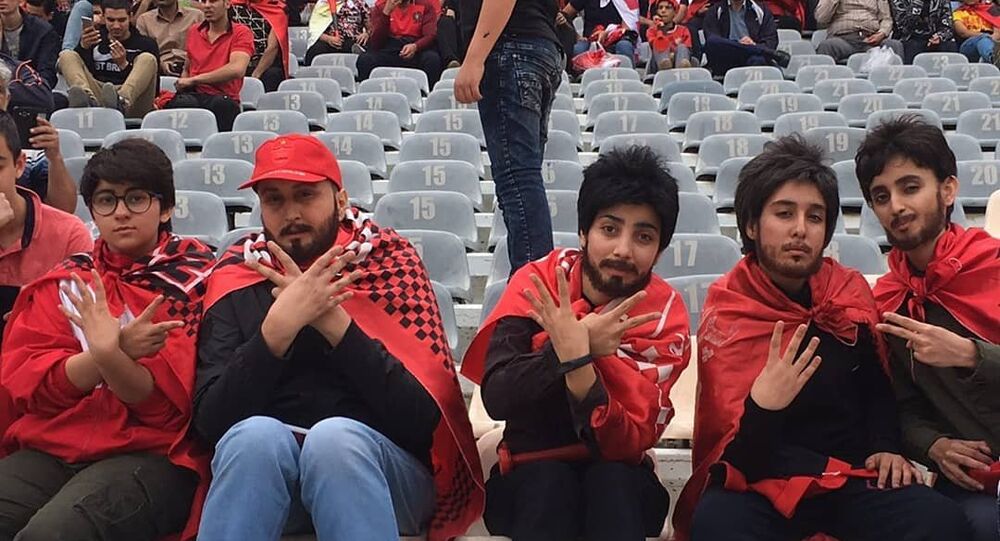 A gang of female football fans wanted to watch their team celebrate the championship in the Persian Gulf Pro League so badly that they gambled with an Iranian ban on women at sports events with a movie-like plot. Their feed from the venue has ignited social media.

Five Iranian women had to play a dress-up trick to pass the security at the central Azadi Stadium in Tehran, as they wanted to share a triumphant moment with their favorite team Persepolis. As women are banned from men’s sports events in Iran, they had to wear men’s clothes, fake beards and wigs to get past the security to get to the stands.

Photos and a video of the disguised outlaws, celebrating their team’s gold medal at the 11th championship of Iran’s Persian Gulf Pro League, went viral after the intruders dared to post them on social media.

Commentators praised their bold move, which can lead to arrest, detention or even a prison term in the Islamic Republic.

Wish one day soon they can enter stadiums with their own identity,
Zahra in Persepolis last season match pic.twitter.com/ZgOT5lF0Sb

They are brave, they are hope.

Others pointed out that the story repeats the plot of the movie “Offside,” in which girls, pretending to be men, sneak into the same stadium to watch a World Cup playoff against Bahrain.

Reminds me of the movie Offside. Lovely and funny movie, yet quite moving.

Some feared for their fate.

What if the girls were caught by the Anti Vices Squad.?

Ridiculous!!!
Girls in the Persepolis Championship Celebration at Stadium
You see, they have to make themselves in the form of men
Because the mullahs have banned women from entering the stadium#women #womensrights #Iran pic.twitter.com/pCJe3ColKj

The girls infiltrated the stadium just three weeks after 35 women disguised as men were detained as they tried to attend a match between Persepolis and Esteghlal in Teheran. According to the Daily Mail, the women were later released after being brought to a “proper place” as a ministry spokesman put it.

It didn’t go so well for Ghoncheh Ghavami, an Iranian-British woman, who in 2014 attended a World League volleyball match and faced charges of propaganda against the state, spending more than five months in prison.

FIFA’s president Gianni Infantino has recently been criticized for turning a blind eye to the Iranian women's right record in Iran after he visit the Islamic Republic to celebrate the 100th anniversary of Iran’s football federation. Infantino rebuffed the criticism, defending the decision not to expel Iran from FIFA.

He stated that Iranian President Hassan Rohani told him that the republic plans to remove the bar, already lifted for some indoor sporting events.

Iranian women have been already allowed to attend a basketball match watching male players play the game. In a historic breakthrough this March, National Basketball Federation of the Islamic Republic of Iran has permitted female visitors to take to the stands and watch a game between the national teams of Iran and Iraq.

At the same time the security chief for the Tehran municipality, Alireza Adeli, commenting on the recent incident, told Memri that women are banned because of the "crowds" and "inappropriate conditions."

"The ban is to save their honour, because the stadium's atmosphere, mess, and crowds are no place for women," he stated.