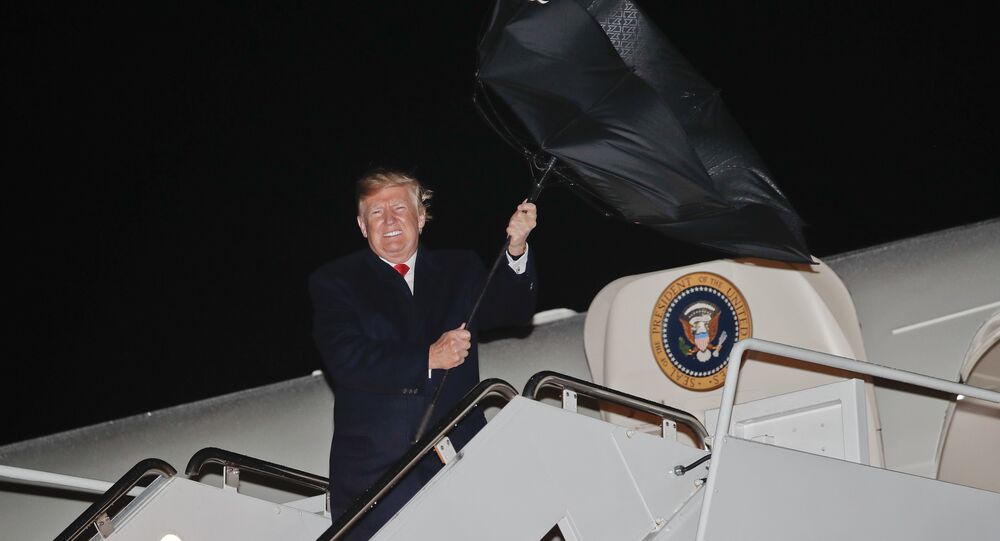 The twitterati are out in force making light of the president's struggle with an umbrella against a powerful gust of wind after his arrival at Joint Base Andrews in Maryland Saturday night after a rally in Michigan.

with his umbrella almost immediately flipping inside out, before walking down the steps and handing the ruined umbrella over to an aide.

Social media users, particularly Trump's opponents, immediately began to make jokes about the blooper, one user quipping that perhaps the umbrella 'roasted' the president after he skipped the White House Correspondents Dinner.

At least @realDonaldTrump got roasted by his umbrella after he hid from the #WHCD pic.twitter.com/vHWTOdKxz3

Michelle Wolf's routine was so fierce it knocked Trump's umbrella inside out.

Trump gets off the plane after missing the #WHCD. His umbrella does this. KARMA! ⚡️⚡️ pic.twitter.com/a1JiVEMCho

Others suggested there was a broader symbolism at play here.

Trump not being able to manage an umbrella is a perfect metaphor for the shitstorm this country is experiencing right now…🙄 pic.twitter.com/K6OClMkTxC

I feel like the umbrella is maybe trying to escape one of Trump’s advances.

Others still suggested that comedian Michelle Wolf's White House Correspondents Dinner remarks, which included criticism of the media elite, were perfectly illustrated by the fact that that same media reported on Trump's umbrella troubles.

The media is making Michelle wolves point right now! All channels are showing Trump arriving in DC and watching is umbrella flip upside down! And this is news?

Some users joked about the alleged collusion between Trump and Russia, quipping that he had turned the umbrella into a satellite dish to catch a KGB broadcast.

I see he turned his umbrella inside out to catch the latest broadcast from the KGB.

The wind was extremely strong. Unbelievably strong. The worst wind the weather channel has ever recorded as a matter of fact and yet, folks, I remained on my feet which is very difficult to do. I have tremendous balance. Fantastic. Nobody can balance in the wind like me.