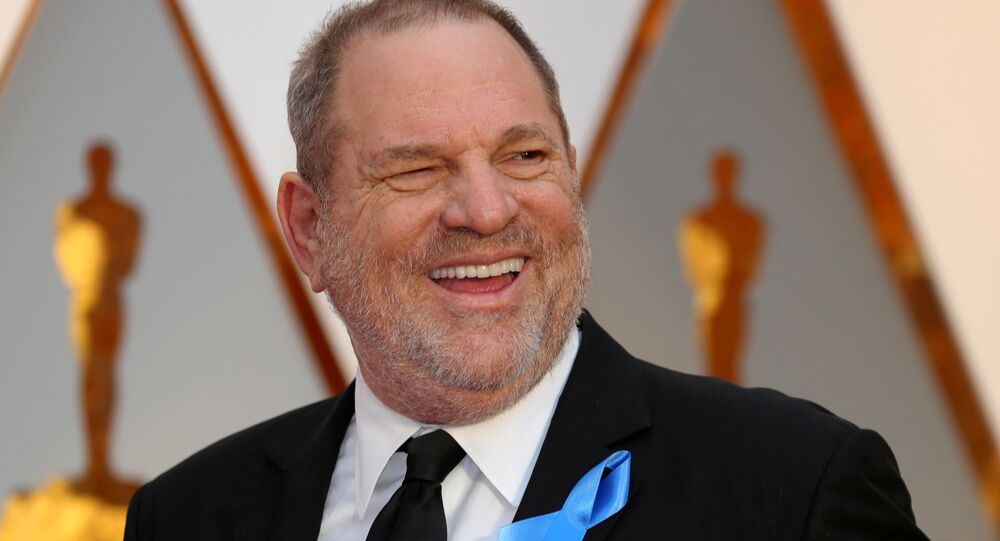 Weinstein Thinks 'He Will Be Forgiven', but Netizens Think Not

Embattled Hollywood mogul Harvey Weinstein, who has been accused by more than eighty women of sexual misconduct, has unexpectedly returned from media oblivion.

"I've spoken to Harvey in the clinic in Arizona, for about an hour. He's fighting," Morgan said.

Touching upon sexual misconduct allegations that were lodged against Weinstein, Morgan claimed that "this has been the system since Hollywood existed."

"It's been a moral cesspit since the '20s, and the idea that Harvey Weinstein is the only villain? Do me a favor. […] Look at Mel Gibson: ultimately Harvey believes he will be forgiven," Morgan underlined.

Most Twitter users weighing in on the issue have expressed opinions to the contrary, insisting that Weinstein should face punishment instead of forgiveness.

Whhhhaaat? This guy has no idea still what type of harm he did. If he finds himself in a position of influence, he will rape and harass again at the drop of a hat. Harvey, while you are vacationing get some books, read about women-u clearly know nothing about them you POS!

Does Weinstein seriously think the atrocities he committed are on the same level as Mel Gibson's drunken tirade? #NoForgiveness

Who will forgive Harvey? His victims? Doubtful. Filmmakers who tolerated him (not knowing how criminal he was)? Why? if they made a film about Harvey, the main character would not be Harvey, he is incapable of redemption. he's a monster preying upon women and now he wants pity.

Harvey Weinstein thinks that he'll eventually be forgiven by Hollywood and the public. I hope that eventually he will stand trial. Sad thing is I could see Hollywood forgiving him because we all know that Hollywood is full of crap.

In October 2017, The New York Times and The New Yorker reported about dozens of women who had accused Weinstein of sexual harassment, sexual assault or rape. By the time everyone who shared their sentiments had stepped forward, more than 80 women working in the industry were claiming that Weinstein had targeted them.

© AP Photo / Damian Dovarganes
Have a Seat: Weinstein ‘Casting Couch’ Statue Pops Up Near Oscar Venue
As a result, Weinstein was dismissed by The Weinstein Company, and expelled from professional associations, including the Academy of Motion Picture Arts and Sciences.

American/Australian actor and filmmaker Mel Gibson sparked public uproar in August 2006 after unleashing an anti-Semitic tirade during his arrest for drunk driving; later that month, he was sentenced to three years' probation after pleading guilty. Gibson rose back to fame in 2017, when he was awarded a best director nomination for his film Hacksaw Ridge in 2017.