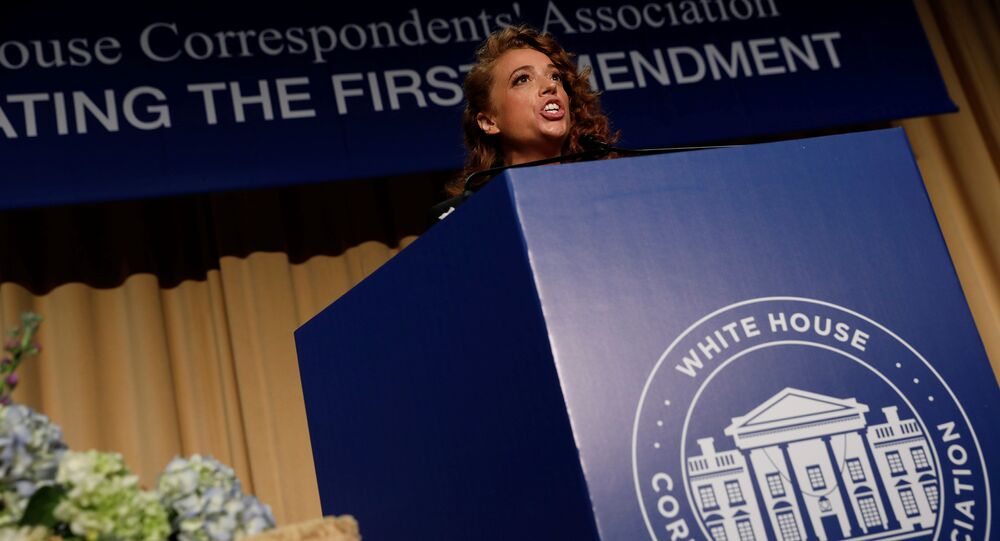 The annual party, dubbed the “nerd prom” and held to celebrate the First Amendment, has brought anyone who is someone in Washington DC to amuse them with a comedian grilling. Although the key inhabitant of the White House skips the dinner, it gets massive, but mixed response on social media.

The annual White House correspondents’ dinner made a splash in the social media thanks to its impressive guest list and traditional visit from a prominent stand-up comedian, who raised questions in the media and on Twitter with some of her punches. Despite the event's status as a US cultural phenomenon, Trump was nowhere to be seen. But his voice has been heard, as he slammed "big, boring bust" and suggested his ideas for next year's event.

While Washington, Michigan, was a big success, Washington, D.C., just didn’t work. Everyone is talking about the fact that the White House Correspondents Dinner was a very big, boring bust…the so-called comedian really “bombed.” @greggutfeld should host next year! @PeteHegseth

He hasn't indicated if he's going to attend the dinner in 2019. The US president's absence made him the first to abstain from the evening's festivities since Ronald Reagan; in 1981, the 'Great Communicator' addressed the gathering by telephone, as he was recovering from an assassination attempt. Trump chose the town of Washington, Michigan over DC, where he headlined a rally and shared his contempt for the posh gathering in the US capital.

"By the way, is this better than that phony Washington White House Correspondents' Dinner? Is this more fun? I could be up there tonight smiling like I love when they're hitting you. Shot after shot, these people they hate your guts. Shot," Trump said, addressing the crowd.

"While the fake news media will be celebrating themselves with the denizens of Washington society in the swamp that evening, President Trump will be in a completely different Washington, celebrating our national economic revival with patriotic Americans."

Last year, Trump opted to stage a rally in Pennsylvania, where he slammed the event, stating that actors and the media were "consoling" each other.
However, this year he sent his staffers to attend the event; last year, nobody from the administration showed up. As the president’s press secretary Sarah Huckabee Sanders put it, “The President encouraged his staff and all of us to attend. And so we did, and we felt like it was important for us to come out and be here."

Sanders, like the conspicuously absent First Family, was roasted by the headliner of this year’s event, Daily Show Correspondent Michelle Wolf.
Wolf mocked Sanders, seated just feet away from her, saying "I like Sarah, I think she's really resourceful. She burns facts and uses the ash to create a perfect smokey eye. Maybe she's born with it, maybe it's lies," she quipped, lampooning Maybelline's well-known mascara slogan.

"Ivanka, she was supposed to be an advocate for women but she is about as helpful to women as an empty box of tampons," the comedian said.

Trump got the lion’s share of the roasting. She said, "Mr. President, I don't think you're very rich. Like, you might be rich in Idaho, but in New York, you're doing fine," taking a shot at Trump's assets and grazing a 'red state' in the process.

Apart from the president, his family, and current and former staff, she also targeted congress members, TV anchors, Republicans and Democrats as well as presidential candidate Hilary Clinton and the media. Some of her jokes got a mixed reaction from the public as well as on-line.

For instance, former White House Press Secretary Sean Spicer, who attended the dinner, concluded his impressions with a short discontented Tweet, although he seemed quite cheerful in his photo posted on Instagram before the evening started.

Tonight’s #WHCD was a disgrace

Meanwhile, commentators on Twitter are split.  As the hashtag #WHCD keeps trending on Twitter, reactions vary from indignation and confusion about the event and poor choice of jokes to praises of Wolf’s bold humor.

Unfortunately, I don't think we advanced the cause of journalism tonight.

Couldn’t agree more. So much important and amazing journalism this year — that should be the focus, when truth matters and is needed more than ever. It was an embarrassment in the room and surely to the audience at home. https://t.co/vhbnG6tn55

And I thought a comedian calling Pres Obama the N word to his face was an embarrassing and offensive & shameful moment at the #WHCD. Tonight’s outright nasty, vulgar, hateful & hurtful “jokes” at Pres @realDonaldTrump, @VP & the women, the women working at the WH was deplorable

Everyone I’ve talked to at event said Michelle Wolfe not funny. Nasty and disrespectful #WHCD

Instead of featuring a comedian at the #WHCD this year, looks like they decided to invite Michelle Wolf instead.

You're now more unpopular than Hillary Clinton (and that's pretty hard to do!). #MichelleWolf #WHCD

Michelle Wolf, take a bow. That was goddamn amazing. Phenomenal.#WHCD

We're on to "It didn't play in the room" takes on Michelle Wolf at #WHCD from people who annually fail to grasp that "the room" is the problem.

Michelle Wolf was not vulgar.

She was “modern day presidential.”#WHCD