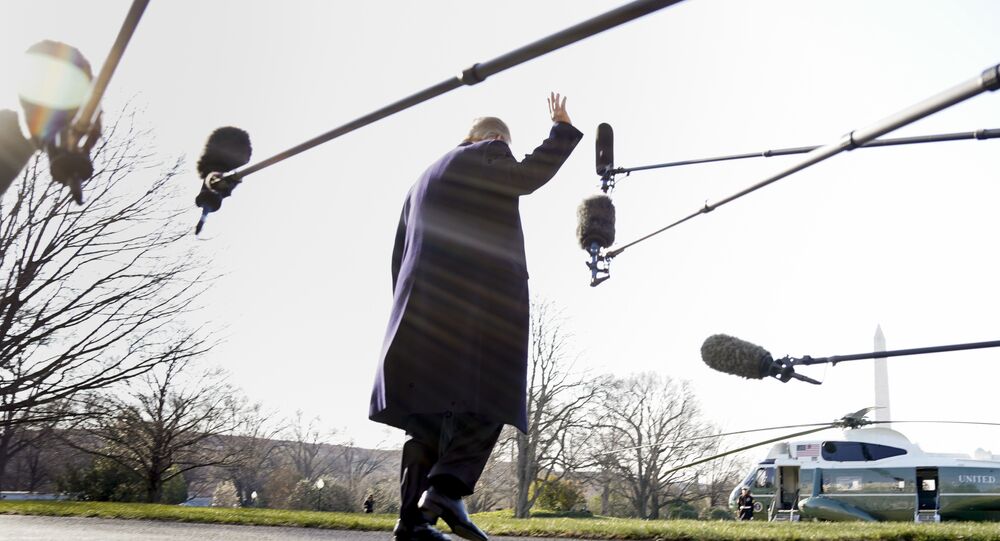 The White House Correspondents’ Association dinner will for the second year in a row be without its primary guest, as US President Donald Trump will skip the legacy Washington DC annual charity event.

© AP Photo / Pablo Martinez Monsivais
Trump on Declassified House Intel Report: No Evidence of His Campaign's Collusion With Russia
Known to be deeply averse to criticism of his person, Trump will instead host a carefully scripted celebratory rally in the state of Michigan, attended only by those who have been vetted for their vocal support of the strikingly polarizing US president.

Initiated in 1921, the annual White House Correspondents' Association (WHCA) dinner is a Washington DC tradition, normally attended by both the president and vice president, along with their wives and close advisors.

This year's event will occur as planned, even without Trump. Hosted by
Comedy Central's The Daily Show contributor and comedian in her own right Michelle Wolf, coverage will begin at 7 p.m. (ET) on Saturday.

The annual charity event is a celebration of the First Amendment of the US Constitution, which reads, in part: "Congress shall make no law […] abridging the freedom of speech, or of the press."

Trump has consistently called media organizations that detail his actions in anything less than a laudatory way "the enemy of the American people."

The world leader's inability to accept countervailing points of view has resulted in the most active swinging employment door of any presidential administration, as an unprecedented 37 White House officials resigned or have been fired in just the first year of his term.

After Trump ducked the WHCA dinner last year, many noted that the last sitting US president to not attend the high-profile event was Ronald Reagan, although he could be excused because he was in a hospital recovering from a bullet wound due to an assassination attempt.

The WHCA dinner is a Washington DC A-list see-and-be-seen event, although since the beginning of the Trump era appearances by high-wattage entertainment and political stars have been sharply cut back, and many before- and after-parties have been cancelled, according to CNN.