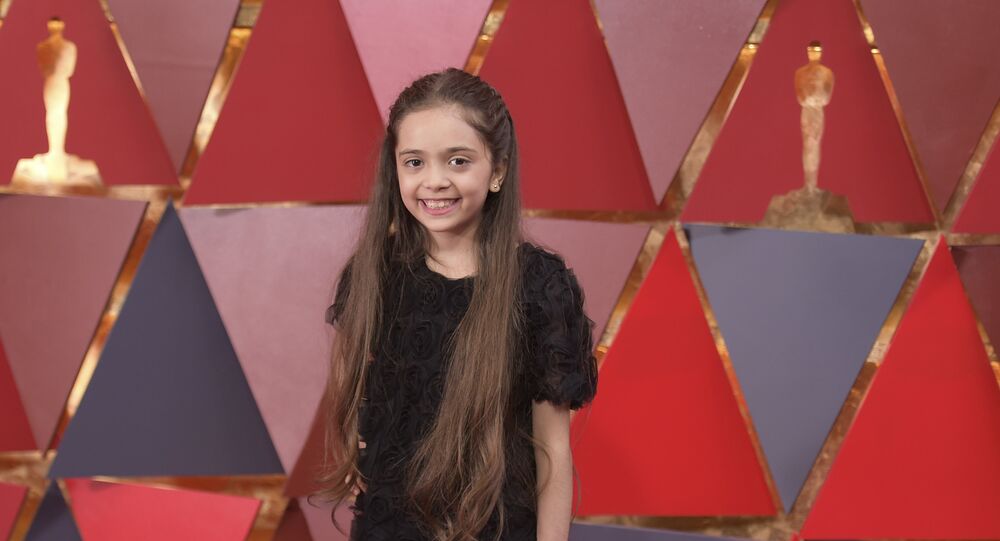 As countless Syrian refugees continue to languish in refugee camps waiting for the conflict in their home country to end, one little girl has risen to worldwide fame thanks to a Twitter account and favorable media coverage.

The violent conflict in Syria that has already lasted for seven years straight and forced millions to flee for their lives and become refugees, to either eke out a meagre living in refugee camps or to attempt to seek asylum in Europe.

But it appears that while for the most of them the war was a terrible disaster that destroyed their livelihoods, a select few were able to escape this unenviable lot.
Enter Bana Alabed.

On April 27, she received the Rising Star award at the Asian Awards in London for what the media described as "her perspective on one of the biggest humanitarian crises in history," according to ITV.

I am so excited I have been awarded by @TheAsianAwards. Thank you. And thank you to my friends who have been supporting me, love you all. pic.twitter.com/8sx2rnMkKl

​"I am so glad that she has accepted our invitation to attend this year’s Asian Awards and collect the Rising Star Award in recognition of her resilience, unconquerable courage, and hope for herself and for other children around the world who are victims and refugees of war," the Asian Awards’ founder Paul Sagoo declared.

On April 14 Bana also attended the seventh biennial UNICEF Ball in Los Angeles, where she had the chance to mingle with celebrities like Jane Fonda, Alyssa Milano and Salma Hayek.

​During the event, hosted in The Beverly Wilshire Hotel, the "eight-year-old Syrian author" delivered a speech "about the need to protect children under attack around the globe, and the importance of organizations like UNICEF," according to a statement posted on the ball’s website.

In March the "eight-year-old Syrian author", as Variety touts her, made an appearance at the Academy Awards ceremony, where she was seen onstage with Common and Andra Day during their performance of Oscar-nominated song “Stand Up for Something”.

And earlier in October 2017 Simon & Schuster released Bana’s book titled “Dear World: A Syrian Girl’s Story of War and Plea for Peace” which allegedly chronicles her experiences in the besieged Aleppo, and which was expected to become a commercial success virtually from the moment she signed the deal with the publisher.

Where It All Began

The eight-year old native of Aleppo rose to prominence in 2016 thanks to a series of tweets posted from her account during a Syrian government offensive aimed at retaking the city. In these messages written in surprisingly fluent English, the rising Twitter star blasted Syrian President Bashar Assad and called upon the world to stop the Syrian army operation which she described as #HolocaustAleppo.

You are talking about the Netflix video or the BBC “Saving Syria’s Children” or the “bombing of convoy” or “Dusty boy” or C4 or Bana #holocaustaleppo or the simple images of Syrian people returning home in their millions. pic.twitter.com/PSETahQL2q

​The US mainstream media quickly portrayed the girl as “the face of Aleppo” and even likened her to famous Jewish Holocaust victim Anne Frank.

Following the liberation of Aleppo by Syrian government forces later that year, Bana suddenly emerged in Turkey where she was greeted by Turkish President Recep Tayyip Erdogan himself.

​Bana’s critics however noticed a number of inconsistencies which cast doubt on the authenticity of Bana’s account.

For example, Bana’s tweets were generally written in fluent English, with vocabulary and grammar used vastly surpassing the level of an ordinary child, and non-native speaker to boot.

Syrian activist Maytham Al Ashkar said that when he managed to contact someone who identified herself as Bana's mother in 2016, when Bana was allegedly still residing in Aleppo, the other party flatly refused his offer to help them evacuate from the besieged city.

"When I got contacted by Bana's account, I started to chat in Arabic since we are all Syrians and Arabic is our mother tongue. However, it was obvious that the person behind the account preferred English as a language of communication," he also added.

Social media users managed to uncover evidence pointing to the fact that the Syrian girl's father is allegedly linked to terrorists, which may explain Bana’s antipathy towards the Syrian government.