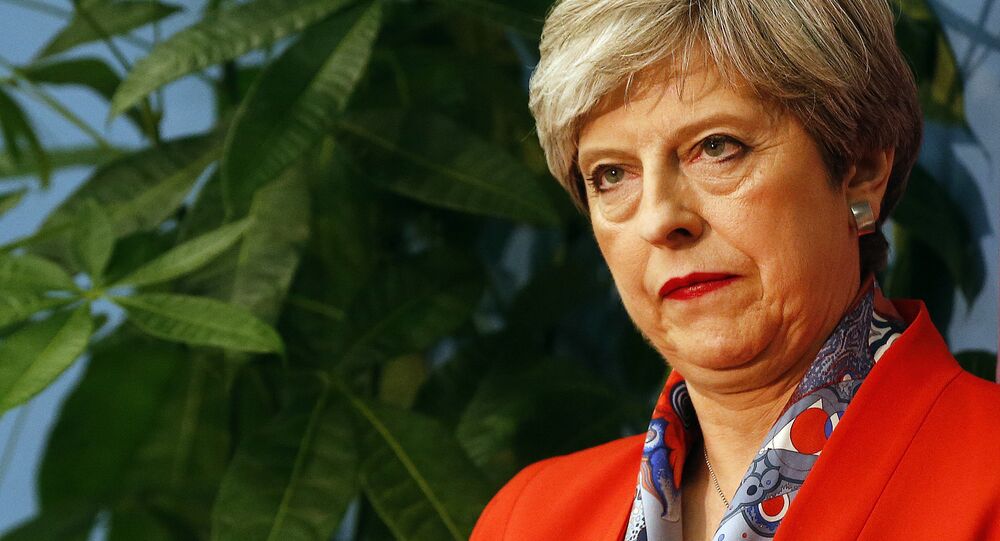 British Premier Theresa May has drawn parallels between a chemical attack that the western Western countries alleged to have taken place in Damascus’s outskirts with the poisoning of former the Russian ex spy Sergei Skripal and his daughter Yulia in UK’s Salisbury on March 4. This is what she told a press conference in London on Saturday.

Theresa May stressed that the best hope for the Syrian people is a political solution, with the air strikes  launched by W western countries on Syria being essentially "about deterring the barbaric use of chemical weapons in Syria and beyond." May stressed the importance of strengthening  the international norms banning the use of chemical weapons, which have notably been there for nearly a century.

"Although of a much lower order of magnitude, the use of a nerve agent on the streets of the UK in recent weeks is part of a pattern of disregard for these norms. So while this action is specifically about deterring the Syrian regime, it will also send a clear signal to anyone else who believes they can use chemical weapons with impunity," May concluded.

She reiterated that the global community can could by no means allow the use of chemical weapons to "become normalized" – be it "within Syria, the streets of the UK or elsewhere."

The allusion to the Skripal poisoning couldn’t but have come unnoticed on social media platforms.

Some openly accused May of hypocrisy and groveling in front of the US, saying the alleged attack by Damascus is yet another specially staged false flag operation:

After not showing a single shred of proof that Syria was behind the ‘chemical attack’ Theresa May has decided to follow the U.S. and become gutless cowards, just like they did in 2003. This was a false flag attack for a reason just like the Skripal poisoning. #Syria https://t.co/2TnuI7IjrM

PM @theresa_may must be hold accountable for chemical attack on Russian citizens Skripal on his own land through his own lab and secret agencies https://t.co/8vV2QhsHsq

— " Today, Theresa May is claiming —astonishingly – that the UK attack on Syria is “to deter chemical weapons attacks in Syria and the UK”. I don’t think the motive for a Skripal false flag could be more starkly demonstrated. " https://t.co/tw6gjrdEbR

One user stated that that this was a shameful statement by May, who is essentially, along with Trump, trying to divert the global attention from her failing policies and "domestic woes."  He said this would be used as another pretext to boycott the 2018 World Cup, which Russia is due to host this summer.

Shame on them,
and those who fail to condemn the war mongers.
This puts Skripal ‘’poisoning” and Syrian ‘chemical attack’ in context.
World Cup ‘boycott’ will be next on cards.
Anything to divert from domestic woes of Trump & May. https://t.co/zBimy6QGsL

The UK and France joined the US assault on Syria overnight on Saturday with three waves of strikes kicking off around 2 a.m. BST. Overall 103 missiles were reported to have landed in Syria, 71 of which were said to have been intercepted by Syrian air defense systems.

Following the move, Theresa May took the floor in Downing Street, saying the strikes were "limited and targeted" and should serve as a "warning to Russia"  and a cue that Bashar Assad's regime should be held accountable for a chemical attack that the Wwestern states alleged to have earlier occurred in the Syrian city of Douma, 10 kilometers northeast of Damascus.

READ MORE: Italy Would Never Allow Missiles to Be Fired Against Syria From Its Soil — PM