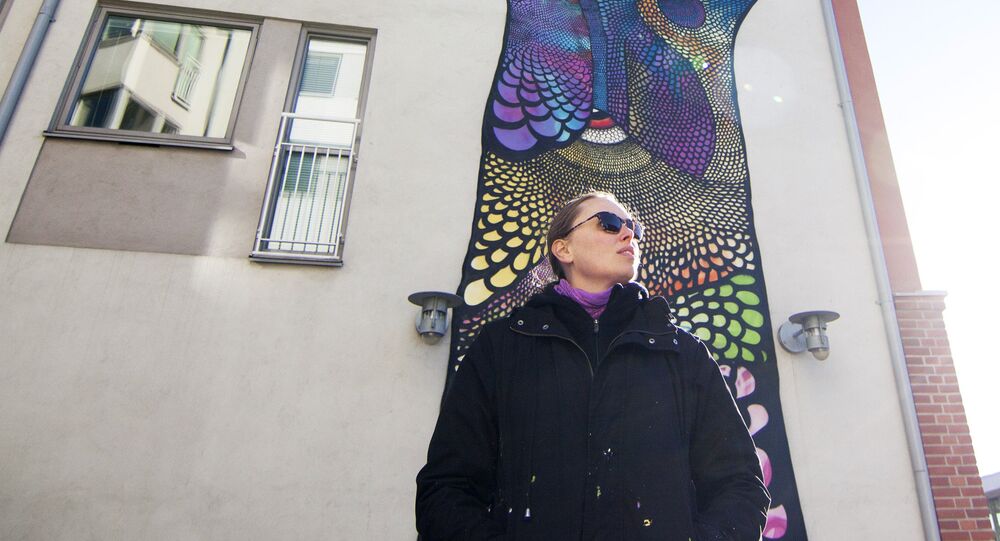 A five-story-high phallic mural, replete with bulging veins, will be removed from the Swedish capital days mere days after its striking appearance, as Stockholmers failed to appreciate the sophistication of the "F**k the world" artwork by an avant-garde feminist artist.

The initial idea was that the humongous erect penis in national blue-and-yellow flag colors would adorn the Kungsholmen district of the Stockholm for a whole six months. However, as the salient graffiti has left few people unmoved, it has been decided to paint it over within a week, Swedish national broadcaster SVT reported.

According to the real estate company Atrium Ljungberg, which owns the property, the mural will be removed due to complaints from the neighbors, who perceived the artwork as offensive.

"Needless to say, we are all about the freedom of artistic expression, but at the same time we have to respect the opinions of the immediate neighbors. By letting the work sit there even for a short period of time, we offer everyone interested an opportunity to appreciate the artwork," Atrium Ljungberg marketing manager Camilla Klint said in a press-release.

"I think it's a shame for a modern society like Stockholm," local man Jeppe Calom told SVT.

The divisive artwork was painted on a legal graffiti wall managed by non-profit organization Kollektivt Livet, which seeks to supports aspiring artists and counteract the society's "zero tolerance for graffiti" by providing them with exhibition space, which means there was no need to consult with residents before painting it. According to the group, however, no other artwork has created a similar uproar over the years.

The penis art was made by Carolina Falkholt, one of Sweden's most renowned graffiti artists. She is not averse to controversy, though, as her artworks often feature naked bodies in contorted positions and genitalia-related motifs. In a tongue-in-cheek way, Falkholt herself describes her artwork as "grafitta," a Swedish portmanteau word made up of "graffiti" and "fitta," meaning "pussy." In another self-description, Falkholt claimed she painted "giant vaginas, pussies and c**ts." Despite the controversy surrounding her persona, Falkholt's artwork adorns numerous schools and parks across Sweden, including a school in Nyköping featuring a vagina-shaped motif.

The "F**k the world" theme featuring a giant phallus was previously exhibited in New York, that time in pink orange and red. The paining on a wall on Manhattan's Lower East Side also lasted only a few days and was removed following extensive media coverage and raucous complaints from residents.

In her comment to the Aftonbladet tabloid daily, Falkholt said that her hope was to force even those repulsed or angered by her art to contemplate the problem of sexuality.

"They should consider what it is they are so upset about and then talk about it. Sex is so important, but it's always been too dirty to discuss," Falkholt said, admitting, though, that she had expected Stockholmers to be more welcoming.

🌈What goes up ~ must come down⛓ #jetlagged #mother #nyc

Local representatives of the Liberals Party, however, voiced their support, venturing that removing the artwork was tantamount to "dangerous censorship."

In 2017, a similar controversy erupted over an art exhibit featuring women on their period displayed at the Stockholm underground. The paintings by feminist artist Liv Strömquist showed ice skaters with period blood staining their leotards. While many users called the "celebration of femininity" disgusting and unfit for the public eye, the artist herself was unbothered by the controversy, and suggested that the artwork might help to break the taboo around this topic. The artwork also gathered numerous supporters who advised haters to "get over it."

Others drew comparison with the Moscow underground, which, they claimed, "neither did stink like a public toilet".​