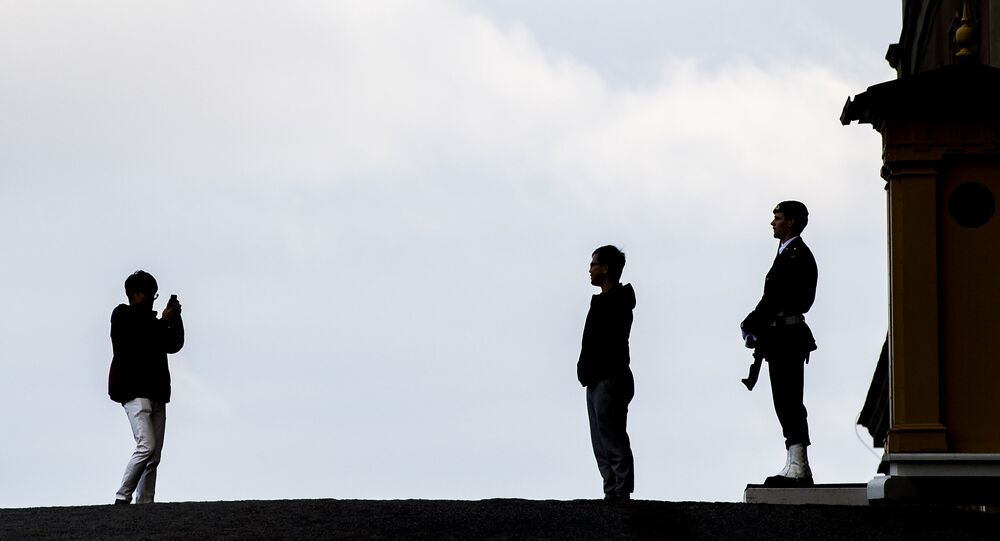 Lars Jon Allas, a Swedish politician and a member of the indigenous Sami parliament who previously called for a revolution, has been reported to the police after threatening tourists by wielding a knife at them.

Sami politician Lars Jon Allas of the Guovssonásti party has been been reported to the police after threatening tourists enjoying a dog sled ride in a snowy landscape with a knife during the Easter vacation, Swedish national broadcaster SVT reported.

According to the report, Jon Allas scared the tourists with his verbal assault and threats of abuse. Jon Allas himself, however, denies the criminal allegations, but is still negative about the tourism industry, which he claims is unauthorized and destroys the indigenous Sami culture. Later, he compared tourists with terrorists, specifically Daesh*.

"They're just like terrorists, destroying everything we've got here. They only care about themselves, all they do is break and destroy, just like Daesh," Jon Allas told SVT. "They kill our nutrition and our animals. They destroy everything in our culture. Tourist companies do not even need permission for their businesses," he added.

Jon Allas also reiterated the "terrorist" rhetoric on his Instragram account, posting an angry rant accompanied by a picture of dog sled tourists.

"These tourists don't speak Swedish. They come from all over the world, they act like Daesh and terrorize reindeer husbandry," Jon Allas wrote, adding that there was no difference between them and terrorists, because they both "force locals to flee" and then "take over."

The rant triggered many reactions from fellow Swedes, with some articulating support for the Sami cause and others voicing bitter criticism.

"You understand of course that it is the tourists and the rest of the Swedish taxpayers who contribute money into the treasury, so that you can continue moving your wandering traffic accidents back and forth between the mountains and the coasts," user Danne wrote on Instagram in response to Jon Allas's tirade.

Even the chairman of the Sámi parliament slammed the incident.

"Of course, it's regrettable if true. No one can support such a thing. As a politician, one must be extra careful with words and behavior. You have to think about what you do, what you answer and how to act outwards," Sami parliament chairman Per-Olof Nutti told SVT.

Håkan Jonsson, the party leader of the Hunting and Fishing Party, the largest in the Sami parliament, argued that the incident and Jon Allas's statements only hurt the image of the Sami.

"There are unbalanced statements that should not occur. This shows that he does not have respect for other people and businesses. There are also many Sami living off of tourism," Håkan Jonsson said.

Jon Allas is known as an ardent supporter of the Sami cause. In 2005, he called for a revolution in order to establish a Sami state as the ultimate goal of his people's struggle for freedom. However, his calls didn't receive much support, even from his own party.

​The Sami (also known the Saami or Laplanders, although the latter term is sometimes seen as derogatory) are a Finno-Ugric people inhabiting northernmost areas of Norway, Sweden, Finland and Murmansk Oblast in Russia. Sweden is home to about 20,000 Sami. Traditionally, the Sami have pursued a variety of livelihoods, including fishing and fur trapping. Their iconic means of livelihood, however, is semi-nomadic reindeer herding. Currently about 10 percent of the Sami are connected to reindeer husbandry.

Today is the Sami national day; an ethnic national day for the Sami people, a Finno-Ugric people who inhabit Norway, Sweden, Finland and Russia. pic.twitter.com/vttvqqqkO9

​* Daesh (ISIS/ISIL/IS) is a terrorist organization banned in Russia