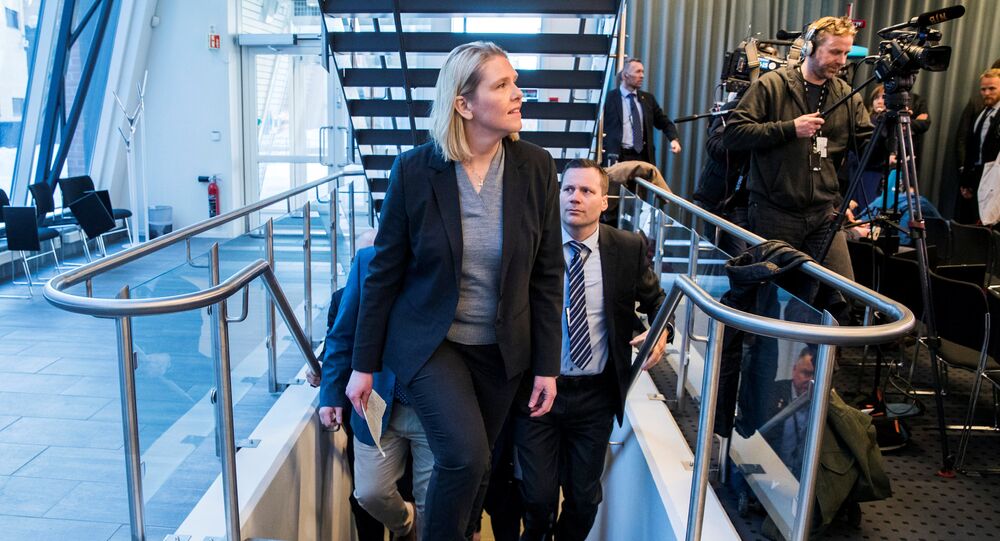 A street artist operating under the alias AFK has added controversy to Sylvi Listhaug's name by depicting the former justice minister, a devout Christian, as a Christ-like martyr wearing a crown of thorns.

The residents of Bergen, Norway's second-largest city, woke up on the last day of the Easter holiday to new graffiti depicting former Justice Minister Sylvi Listhaug, who recently stepped down amid controversy, crucified as a martyr surrounded by journalists' microphones and flower bouquets, very much like those sent by dozens of supporters and well-wishers.

Listhaug's arguably least conventional portrait also featured the logo of the right-wing Progress Party, of which she is a prominent member, on her shoulder together with the phrase "min kamp" written on her stomach (which is the Norwegian translation of Hitler's book "Mein Kampf," but is also the title of an autobiographical series by Norwegian author Karl Ove Knausgård).

The "kamp" (or "struggle") inscription may also refer to the departing speech Listhaug made while leaving her post as justice minister, in which she pledged to "continue her struggle."

In March, Listhaug was forced to resign to prevent a vote of no confidence, following the outcry stirred by her Facebook post, in which she attacked the rivaling Labor Party for "valuing the rights of terrorists above the security of the nation," to which she added a photograph of al-Shabaab* militants.

Listhaug's post was part of her verbal attack on the Labor's refusal to back up the proposal to strip the citizenship of Norwegians suspected of posing a threat to the nation's vital interests without a court order. Listhaug's rhetoric was criticized as insensitive and provocative as the Labor Party was specifically targeted in the deadliest attack on Norwegian soil after WW2, carried out by Anders Breivik, a former Progress Party loyal, who killed 69 attendees at a Labor youth camp on the island of Utøya in July 2011. Following Listhaug's resignation, which incidentally triggered an influx of new members to the Progress Party, she received dozens of flower bouquets in support from her followers.

"I have great respect for freedom of speech through art, and I have great respect for street art in Bergen, where it enriches the city. But this is how it is with art designed to provoke: it is provocative," Solberg, a Bergen native, told national broadcaster NRK, venturing that Listhaug hadn't tried to pose as a martyr, nor did she herself view her as such.

"This is a nasty reference that should have been avoided," Thomsen told NRK.

Frode Bjerkestrand, the cultural editor with the local Bergens Tidende daily, called the graffiti "smart and clever." According to him, Listhaug, who styled herself as the foremost defender of free speech, was given a taste of her own medicine, calling it a "Catch 22 situation" and a "checkmate" for Listhaug, NRK reported.

Henrik von Achen, professor of art history at the University of Bergen, argued that the artwork was "not badly made." While voicing his understanding for those affronted, he also ventured that all art that stirred feelings should be welcome. Von Achen stressed that the crucifixion has a long tradition of being used as a symbol of unjust treatment, but suggested that this use most likely was ironic.

AFK, the artist behind the controversial mural, acknowledged to the Christian newspaper Dagen that the artwork was intended as a comment on Listhaug's rhetoric and her "self-sacrifice" for the sake of the Progress Party, not as a personal attack. The anonymous artist claimed that Listhaug in reality was "prevented from making right-wing extremist statements and promoting conspiracy theories."

Listhaug herself, who is currently on a trip to the US, did not comment on the artwork, however, one of her Facebook posts was seen as a subtle reference. Listhaug posted a picture of a Cadillac SUV she "was happy to drive," calling it "a real work of art on four wheels."

Whereas the committee of the building's joint owners told Dagbladet they intended to let the painting stay in place, it was partially painted over, later on.

Someone was busy last night… A thanks goes out to the unknown artist who added the finishing touch I was looking for! It accompanied mine nicely!