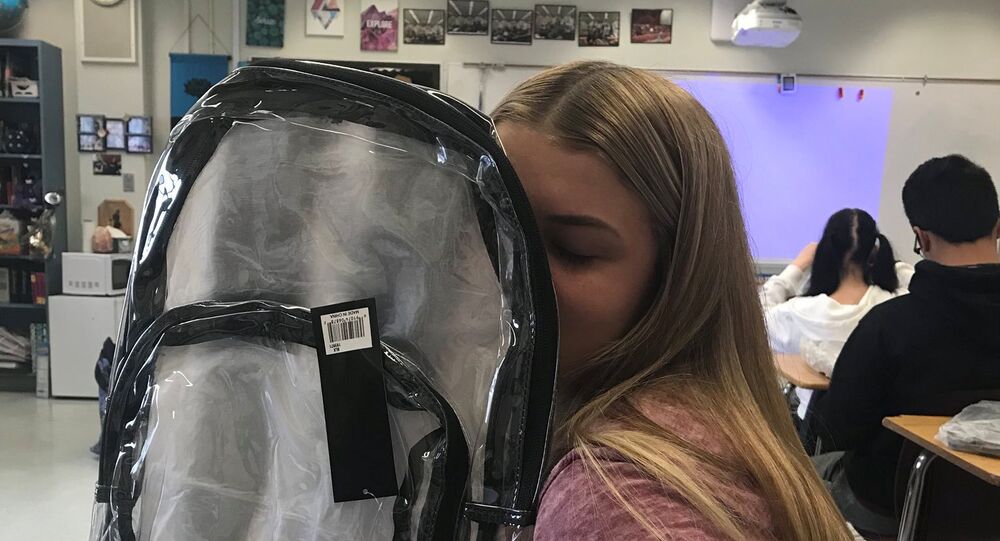 17 students were killed in a February mass shooting at Marjory Stoneman Douglas High School by former student Nikolas Cruz. It was the deadliest school shooting to have occurred in the US since the beginning of this year and has fueled the student movement “March for our lives,” aiming for stricter gun control.

New security rules have been imposed at Marjory Stoneman Douglas High School in Parkland, Florida after the recent deadly mass shooting. Students and faculties now have to wear special ID cards at all times and all students will now also have to use transparent backpacks instead of regular ones.

READ MORE: After Parkland Shooting, Some Teachers Consider Leaving Due to Safety Issues

The move, aimed at easily checking the contents of the bags for guns, didn't receive a warm welcome by students. Many, including the students, have taken to Twitter to express their discontent with the measure, branding it useless and a violation of their right to privacy.

These clear plastic backpacks are beyond pathetic & extremely ignorant. The shooter carried a black duffle bag like you would use for gym equipment. The next shooter will do the same while incompetent sheriffs & our FBI continue to screw up their jobs.

I’m baffled at the overt acceptance of “freedom” restrictions like clear bags, no bags & no mechanical pencils, but gfb you argue for licensing, background checks & restricting access to youth or abusers or others and holy hell breaks lose…over a thing solely meant for killing.

The irony is that an AR15 can't even fit in a backpack in the first place. Perfect example of incompetence in the adult generations. Do they wanna save kids or not?

You can enforce clear bags, but what about clear pants? https://t.co/XMxXoIvI88

Nothing beats a morning walk through fenced lines with a bag check! Where am I, again? pic.twitter.com/6gDPs8zZ3Q

Some of them noted that instead of introducing transparent bags, lawmakers should adopt laws that prevent guns from ending up in the hands of dangerous people and to stop protecting the NRA's agenda.

I cannot believe the audacity lawmakers have. Why is it a good idea to change to clear bags? Instead, lawmakers SHOULD change gun laws to create a safer school atmosphere. #GunControlNow

New Rule: All GOP officials who accept money from the NRA must carry their bribe — I mean, contribution — in a similar backpack so we can all see just how bought off they are. If kids need to use clear bags for “the schools safety”, elected officials should need to for America’s.

My new backpack is almost as transparent as the NRA’s agenda.

As much as I appreciate the effort we as a country need to focus on the real issue instead of turning our schools into prisons. #clearbackpacks #MarchForOurLives pic.twitter.com/HqBIeGjzF9

Others were just mocking the new school "fashion."

Looks like someone found a good use for the clear bags pic.twitter.com/M1yqFvJJNc

I do love irony. pic.twitter.com/pk7N2Ex0ZQ

Now I can’t pretend to look for my homework when I really don’t have it. pic.twitter.com/hrkSBlz6of

Nikolas Cruz, a former student at Marjory Stoneman Douglas High, expelled over disciplinary issues, brought an AR-15-style semi-automatic rifle to his former school on February 14, 2018 and opened fire, killing 17 people and injuring 14 more. The mass shooting became the deadliest in a row of school attacks that has plagued the US since the beginning of the year.