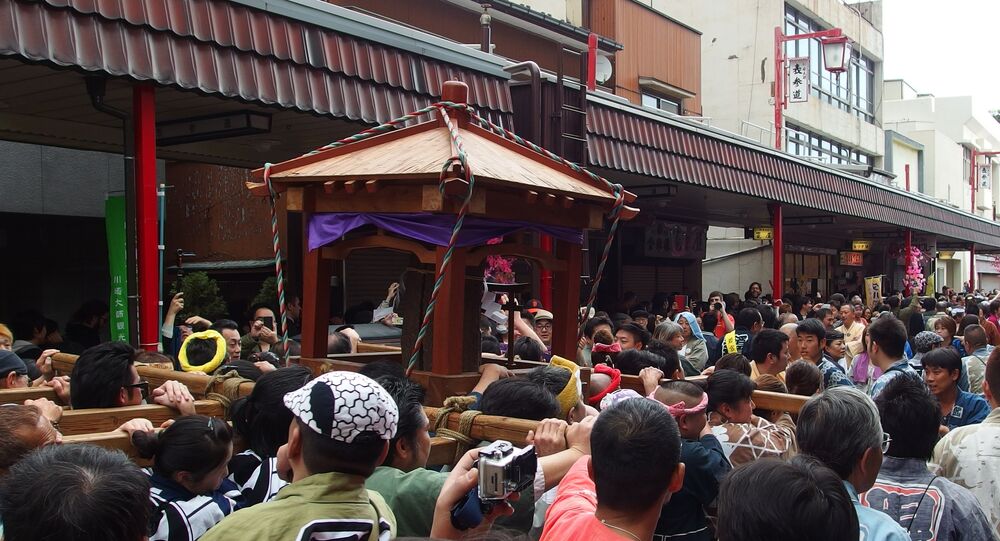 The Japanese celebrate the festival annually by marching through the streets with giant phalluses, as well as phallus-styled lollipops, candies and costumes. While many foreigners smile at the bizarre tradition, it is deeply rooted in old Japanese legends.

Kanamara Matsuri, or the Festival of the Steel Phallus, is celebrated on the first Sunday of April each year at the Kanayama Shrine in Japan's province of Kawasaki. On this day, the key "figure" can be seen everywhere, with even food, such as candies, lollipops and vegetables being phallus-shaped. It seems as though it doesn't bother anybody, as many people can be seen eating them.

The Kanamara Matsuri aka The Penis Festival https://t.co/T32XnZsKnp via @YouTube

We couldn't leave without a few of these totally innocent lollies #kanamaramatsuri pic.twitter.com/6z7cKwY1lO

But it doesn't stop there — several giant penises were also marching through the streets. Some people even went so far as to wear phallus-themed costumes.

https://t.co/7fcFAWNm5o#KANAMARAMATSURI 2018There is no stronger celebration of the Japanese joystick than Kawasaki’s Kanamara Matsuri.Despite smirks and giggles from foreigners it’s an ancient tradition & celebration of fertility, long marriages and healthy births, pic.twitter.com/MX2oPdnVC0

🎬 On promotional tour in Japan right now. Japan is one day ahead of USA so it's Monday at 5am now. Just waking up. Yesterday was Kanamara Matsuri in Kawasaki City. pic.twitter.com/ppfbDtr9sQ

The strange festival actually has religious roots. It is believed that a sharp-toothed demon once "inhabited" the vagina of a young woman whom he loved, and would use his teeth to castrate any "intruders." The desperate woman asked a resourceful blacksmith for help and he forged a steel phallus for her. The demon received a huge bill from his dentist and the steel phallus was installed in the Kanayama Shrine.

People would visit the shrine to ask for protection against sexually transmitted diseases, as well as for quick and easy child birth, harmony in couple's relationship and prosperity. Now it is mostly a tourist attraction and location where the festival is organized.