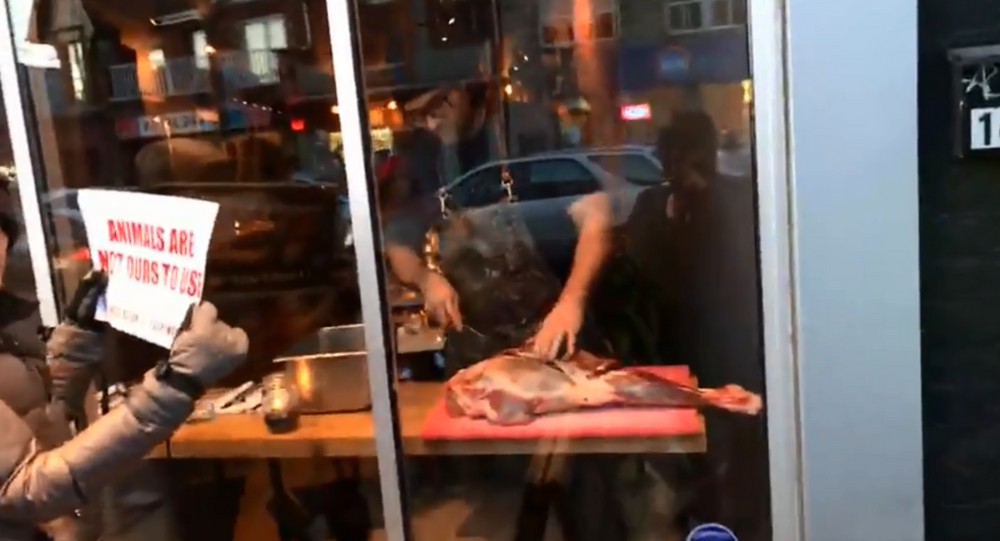 A group of animal rights activists stationed outside of Toronto's Antler restaurant saw nothing but red on Friday after the shop's owner decided to carve up a deer and eat it in front of protesters.

Footage of the incident, which was widely circulated on social media over the weekend, shows restaurant owner Michael Hunter coming up to the establishment's front window and cutting up what spectators determined was the leg of a deer. Hunter reportedly later returned to the window and ate the piece of meat after cooking it.

The demonstration, the fourth of its kind carried out by local activist Marni Jill Ugar, included protesters carrying banners that said "murder," "please add vegan steak to the menu" and "animals are not ours to use," The Star reported.

Antler is known for serving up native Canadian meats including, bison, boar, rabbit, duck and deer, according to the New Zealand Herald.

Speaking to The Star, Toronto police spokesperson Jenifferjit Sidhu noted that police had shown up to the restaurant twice, but only in an effort "to keep the peace." She later indicated that no charges or tickets were issued.

Though Hunter had initially declined to comment on the incident, he later told the outlet that such protests were the norm for the restaurant industry.

​"We are operating business as usual… Our identity as a restaurant is well known throughout the city as is our ethical farming and foraging initiatives," he said in an emailed statement. "We stand by our restaurant's identity and the identity of myself as a chef."

Ugar later remarked that the protest was scheduled to offer a bit of education on animal rights.

Despite what happened over the weekend, The Star reported that both Hunter and Ugar are planning to go out to forage for vegetables after they spoke on the phone to discuss the issue.
But while both the two were able to squash their temporary beef — erm, venison?— the same could not be said for some netizens.

​It's unclear if the protests will continue to take place outside of the restaurant.

We Want Our Money 'Fat-Free': UK Vegan Row Over £5 Note