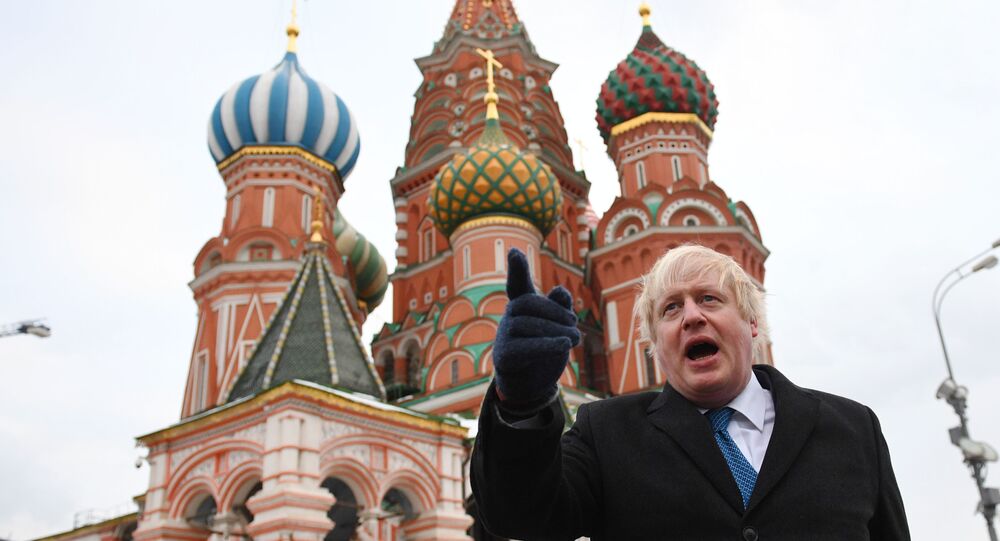 Twitter lit up with sarcastic remarks and genuinely concerned commentary over Boris Johnson's latest allegations against Moscow in the Sergei Skripal poisoning case.

Johnson lashed out against Moscow on Monday, calling Russia's increasingly adamant denials that it anything to do with the Skripal case "increasingly absurd."

"This is a classic Russian strategy of trying to conceal the needle of truth in a haystack of lies and obfuscation," Johnson said, as he arrived for a meeting of European Union foreign ministers in Brussels.

But some Twitter users had a different view. Calling the foreign secretary's comments "childish and boorish," users warned that there could be something more sinister behind Johnson's increasingly belligerent claims, or questioned the work of the UK's investigation into the ex-spy's poisoning.

Are the Tories trying to trigger emergency powers by engineering a conflict with Russia? As time goes on, that is what it is looking like. They are bending over backwards to shoehorn evidence in to fit the facts. Johnson's latest grandstanding is childish and boorish.

Boris Johnson speaks his own mind, and that's about it, he has no proof on anything. His voice is very dangerous and could lead to WW3. #Russia #BorisJohnson #Putin #SergeiSkripal

Russia really is no threat to UK. And right now, biggest issue is not Brexit, but the way that our own government is endagering us all. Russia is not our enemy — but Theresa May and Boris Johnson are lying at full volume to try to make them an enemy. At the bidding of US neocons

Question 1) Why are these firemen not protected — are they in hospital?
Question 2) Why on earth would Russia leave a calling card that points the finger straight at Putin — before Russia election and hosting World Cup?
Question 3) Does the UK government think we are stupid? pic.twitter.com/YXrcfunTdS

Others simply noted they weren't convinced by Johnson's approach, given his own colorful political record.

The more Boris Johnson screams "he did it!" like a lunatic witch burner, the more I think Russia didn't actually do it.

“Haystack of lies” is literally the best description of Boris Johnson I’ve ever read. pic.twitter.com/Jhsv4jrPxZ

During Monday's visit to Brussels, Johnson was expected to try to shore up European unity against Moscow over the Skripal case. "There is scarcely a country round the table here in Brussels that has not been affected in recent years by some kind of malign or disruptive Russian behavior," he said ahead of his ministerial meeting.

But Twitter users were having none of that, either, pointing out that mere months earlier, Johnson had stood as one of the champions of Britain's break with Brussels.

Serial liar Boris Johnson asking today for unity against Russia from an EU he demonised with Fake News, fibbed about in the referendum and continues to ridicule is the chutzpah of an over-privileged oaf

Following an entire career built on maligning & misrepresenting the EU, culminating in Brexit, Boris Johnson is in Brussels today seeking political unity with our soon to be ex-partners. What a bloody travesty.

Monday's meeting is not expected to result in any new measures against Russia, although EU diplomatic head Federica Mogherini has said the EU stands in "full solidarity" with London over the Skripal case.

© REUTERS / Hannah McKay
Russian Diplomats Expelled From UK to Fly Out of London Tuesday - Source
Former Russian spy Sergei Skripal and his daughter Yulia were found poisoned outside a shopping center in the southern English city of Salisbury earlier this month. London has accused Moscow of involvement, a claim which Russia has adamantly denied, citing lack of evidence. On Wednesday, the UK announced a series of measures against Russia, declaring 23 employees of Russia's embassy in the UK personae non gratae, a move which Russia reciprocated.
...
Reddit
Google+
Blogger
Pinterest
StumbleUpon
Telegram
WhatsApp
883